‘General Hospital’ (GH) spoilers for Monday, May 2 reveal that Jason talks Michael down, Sam demands answers from her dad, anger turns to passion for one Port Charles pair, and Nikolas plays dirty with his wife. Here’s what you’ll see on the next GH.

Some GH spoilers tease that Carlos might get the chance to go on the run again soon. Can Jason discourage Michael from making a major misstep in desperation to get back with Sabrina? Can Carlos be trusted at all?

Sam Morgan [Kelly Monaco] has an unsettling chat with her dad Julian Jerome [William deVry] and point blank asks if he had anything to do with the shooting of Sonny Corinthos [Maurice Benard]. Interestingly, that seems to be the one crime he didn’t do – that was Paul Hornsby [Richard Burgi].

Alexis Davis [Nancy Lee Grahn] goes to talk to Hale, the eyewitness against Carlos. Hale tells her to go away and says “I know my rights.” Will Alexis figure out someone has put Hale up to this? Will Alexis be nearby when something bad happens to Hale?

Anna Devane [Finola Hughes] is happy to be out on bail and meets up with Griffin Munro [Matt Cohen] at the Floating Rib. Griffin will run into Mac Scorpio [John J York] at The Rib and tries to evade Mac’s prying questions about his past. What is Griffin hiding?

Anna tells Griffin it’s the anniversary of his father’s death and they commemorate his loss in a unique way. What will Griffin and Anna do to reminisce about Duke Lavery [Ian Buchanan]? Will Mac be part of this event since he also knew Duke for many years?

Jordan Ashford [Vinessa Antoine] slaps Andre Maddox [Anthony Montgomery]. Jordan is jealous of what she thinks are his romantic feelings towards Anna. However, it looks like that slap lights sparks and the two will end up heating things up and they’ll end up in bed at long last. 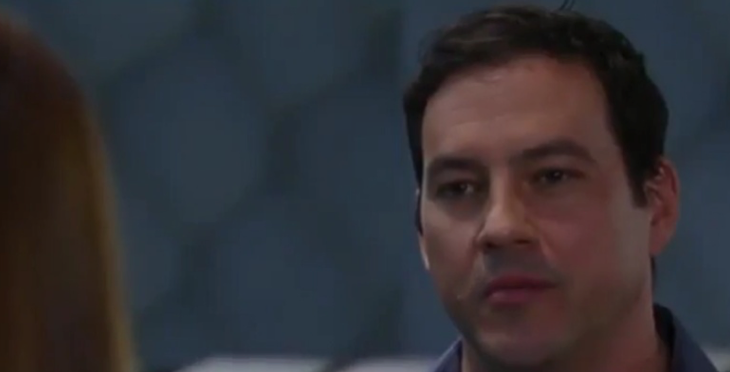 Hayden Barnes [Rebecca Budig] has to face questions from the FBI but it’s doubtful they’ll get any admission of guilt from her. When the Feds cut her loose, she runs into Nikolas Cassadine [Tyler Christopher]. He tells her was protecting himself – did he rat her out her location to the FBI?

Don’t miss a moment of the Monday, May 2 episode of GH and come back to Soap Opera Spy every day for more ‘General Hospital’ spoilers, news and more.