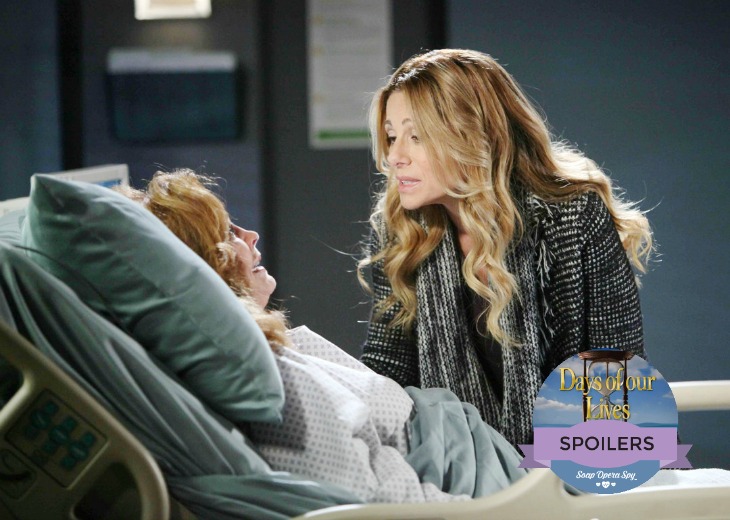 “Days of Our Lives” spoilers for Monday, May 2, tease that Summer (Marie Wilson) will be shocked when a familiar face appears in town. Josh Burrow will debut in the role of Clark, a hot bad boy who has plenty of dirt on Summer. Clark will blackmail Summer to get what he wants, but you shouldn’t get too attached to this newbie. DOOL spoilers indicate that a brawl will leave Clark dead later this week.

Meanwhile, Theresa (Jen Lilley) will argue with Brady (Eric Martsolf) over his need to play the hero. She’ll give Brady a hard time about his Superman complex, but he won’t have the same view. When it comes to Summer, Brady believes he’s just been doing what’s right. “Days of Our Lives” spoilers say Summer will continue to cause problems for this couple in the coming weeks.

Elsewhere, Justin (Wally Kurth) will approach Deimos (Vincent Irizarry) with an interesting offer. “Days” viewers know that Justin, Victor (John Aniston) and Brady are all in on a plan to bring Deimos down. Will Deimos take whatever bait Justin tosses out? We’ll have to wait and see, but this crew had better be careful. Deimos has proved that he’s a force to be reckoned with.

We’ll also see Deimos sharing a proposal of his own. Kate (Lauren Koslow) will be stunned when Deimos suggests Nicole (Arianne Zucker) should be the CEO of Basic Black. There’s obviously some bad blood between Kate and Nicole over this company.

Kate was happy to buy Nicole and Theresa out when they wanted to start DJ Wear. She finally got rid of them and could do whatever she wanted. Even though Kate has moved up the corporate ladder, she won’t like the idea of Nicole advancing thanks to Deimos’ favor.

Of course, we know Nicole is trying to worm her way into Deimos heart for revenge and it seems it’s working. DOOL rumors hint that Kate could end up getting kicked to the curb eventually. Stick with “Days of Our Lives” for updates on how things will play out.

So “Days” fans, what do you think about the news that Clark will hold something over Summer? Will Theresa and Brady ever move past their issues? Will Deimos go for Justin’s proposition? Is Kate about to fly off the handle? Voice your opinion in the comments below and don’t forget to check Soap Opera Spy often for the latest “Days of Our Lives” spoilers, rumors, updates and news.