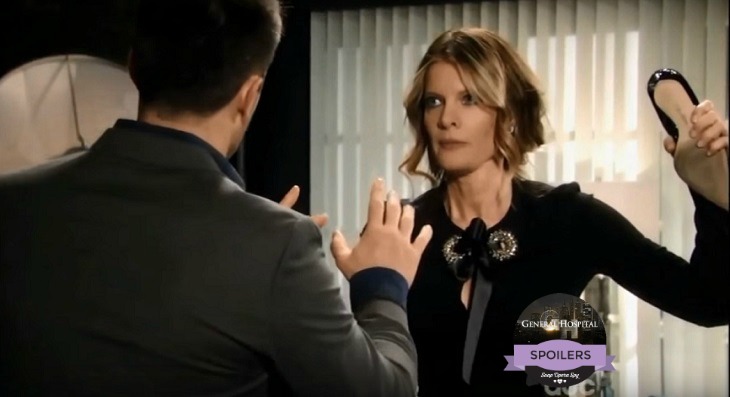 ‘General Hospital’ (GH) spoilers reveal that Nina Clay [Michelle Stafford] will be hard hit by her break-up and will turn to the unlikeliest of people for comfort – Julian Jerome [William deVry]. Should Alexis Davis [Nancy L Grahn] be worried? Maybe so…

This Franco [Roger Howarth] and Nina split will affect many in Port Charles starting with Julian. Now that Julian and Nina shared a touching moment when Nina told him about her sadness over her infertility, she’ll be more willing to talk to him about her pain over the split.

GH spoilers reveal that Nina cries on Julian’s shoulder and sparks may flare. This seems like a terrible storyline given how happy that Julian and Alexis have been and how deep their connection is, but GH loves to break up happy couples, so it’s not out of the question.

After the witness to the Duke Lavery [Ian Buchanan] shooting is killed in coming days, Alexis will suspect Julian had the guy whacked. It sure sounded like Julian ordered Hammer to take out a hit but it could be Paul Hornsby [Richard Burgi] that kills Hale.

It won’t be too long before Alexis sorts out for herself that Julian is back running the Jerome organization – and she may suspect he was never fully out of the mob. This is a deal breaker for Alexis. She will not tolerate Julian being with her and being in the cartel.

It would break Alexis’ heart, but her dumping Julian is a likely outcome once all his dirty laundry is revealed. And if Nina and Julian are deepening their working relationship into a friendship, romance could follow for the duo if Julian is also single.

GH spoilers tease that Julian will be arrested at the Nurse’s Ball a year to the date of when he had Duke shot. We’re wondering what evidence will fuel this arrest unless Carlos Rivera [Jeffrey Vincent Parise] decides to flip on Julian… Which woman will stand by him?

What do you think? Would it break your heart to see Julexis split up? Do you think Julian and Alexis breaking up is inevitable since he’s back in the mob – or could Alexis live with it? Will Nina make herself available to Julian because she’s heartbroken over Franco?

Share your comments below and come back to Soap Opera Spy below for more ‘General Hospital’ spoilers and news.