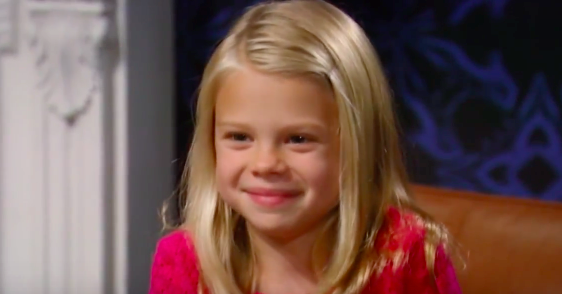 Lulu knew there was at least one embryo out there somewhere and had hoped to find it. Recently Lulu and Dante Falconeri [Dominic Zamprogna] discovered that Helena Cassadine [Constance Towers] attempted to hire a surrogate to carry Lulu’s embryo.

The couple’s excitement turned to sorrow when Daphne informed Lulu and Dante that the embryo wasn’t viable. Helena has perhaps hired another surrogate but Daphne had no further information.

‘GH’ spoilers tease that Lulu will feel an instant connection with Charlotte when they meet. Lulu’s mom Laura Spencer [Genie Francis] has met Charlotte and has suspicions that the little blonde girl looks very familiar. It’s not a stretch that Lulu would feel the same way.

Lulu will share her suspicions with best friend Maxie Jones [Kirsten Storms]. ‘General Hospital’ tease that Maxi may go overboard in pursuit of answers about Charlotte’s parentage. That includes the possibility that Maxie and Lulu will be forced to obtain a DNA sample by unauthorized means to determine if Charlotte is Lulu’s biological daughter.

Charlotte’s appearance in Port Charles has been leading up to a huge reveal that she is indeed Lulu’s biological daughter. ‘GH’ spoilers indicate that Dante, Maxie and Lulu will discover the truth – Lulu is Charlotte’s mommy. But that answer leads to more questions.

Was Claudette Bolland [Bree Williamson] selected as the surrogate by Helena? If Charlotte is Lulu’s biological daughter, how could she be Valentin Cassadine’s [James Stuart] daughter also? Lulu’s embryos were fertilized by Stavros Cassadine [Robert Kelker Kelly].

Stavros died during the explosion at Crichton-Clark Clinic, didn’t he? Or did he? ‘General Hospital’ spoilers indicate that there is a possibility that Valentin is really Stavros.

Related: Do You Want Jason and Sam to Have a Boy or a Girl? VOTE!

How can that be? A little plastic surgery could have changed Stavros’s looks just enough so that he could pass himself off as a long lost illegitimate son of Mikkos Cassadine [John Colicos].

Is Charlotte Cassadine the biological daughter of Lulu Falconeri? If so, how can Valentin be her biological father? Either Valentin tampered with the original DNA testing or there is another surprise in store for Lulu and Dante.

‘Days of Our Lives’ News: DOOL Alum Jensen Ackles Shares News of the Birth of His Twins