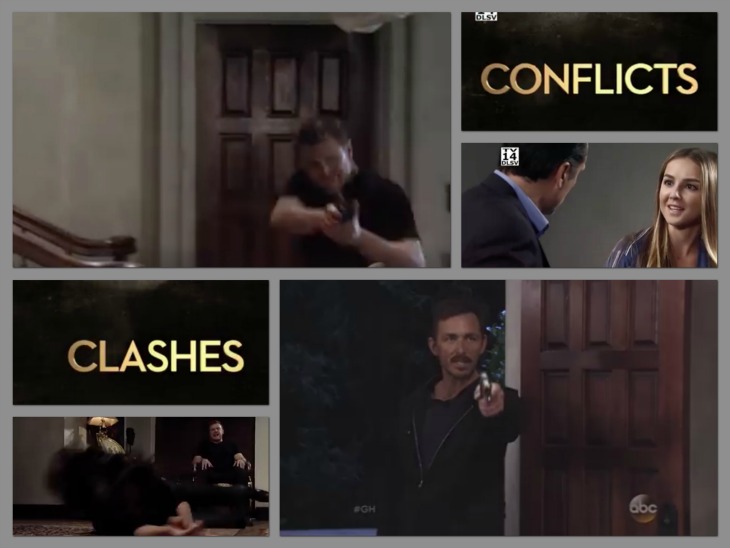 ‘General Hospital’ spoilers tease that alliances, confrontation and danger will affect every resident of Port Charles. Unlikely alliances will be formed, a daughter will confront her father and all those on Cassadine Island are in danger.

In the video spoiler promo Sonny Corinthos [Maurice Benard] will demand answers from Hamilton Finn [Michael Easton]. In the ‘GH’ spoiler video the mobster demands, “Do we have a deal?” What deal will this unlikely alliance of the mobster and the possibly drug addicted doctor bring?

Sonny is considering contacting some of his less than ethical cronies in order to procure the drugs Finn says he needs to stay alive. What does Sonny want from Finn in return? Finn has been helping Carly Corinthos [Laura Wright], but will he demand more from Finn?

Kristina Corinthos [Lexi Ainsworth] is tired of Sonny walking around on eggshells regarding her sexuality. Kristina has already discussed this matter with Alexis but Sonny and Kristina haven’t had a heart-to-heart yet.

It’s not exactly easy for Sonny’s children to get their close-minded father to see things from their perspective. ‘General Hospital’ video spoiler reveals that Kristina is fed up with Sonny’s tip-toeing around. “Why don’t you just come out and ask me if I’m gay?” Kristina angrily says to Sonny.

Meanwhile, on Cassadine Island Valentin Cassadine [James Patrick Stewart] makes a deadly promise. Raising a gun and pointing it at his hostages Valentin declares, “The first one who breaks the rules dies.”

In the ‘General Hospital’ spoiler video Sam Morgan [Kelly Monaco] collapses faints. Why would Sam collapse? The con woman turned private investigator is one of the toughest women in Port Charles. It’s unlikely Sam would collapse from the mere sight of a gun. Is it possible Sam fainted because she is pregnant?

Jason Morgan [Billy Miller] will attack Valentin and the two men will struggle for the gun and Jason will wrestle it away from Valentin. A shot rings out, someone falls off a balcony. Did Jason shoot to kill Valentin?

The ‘General Hospital’ spoiler promo promises, “Clashes, conflicts and confrontations. Battle lines have been drawn.” Get ready, this week is going to be full of suspense on ‘GH’!