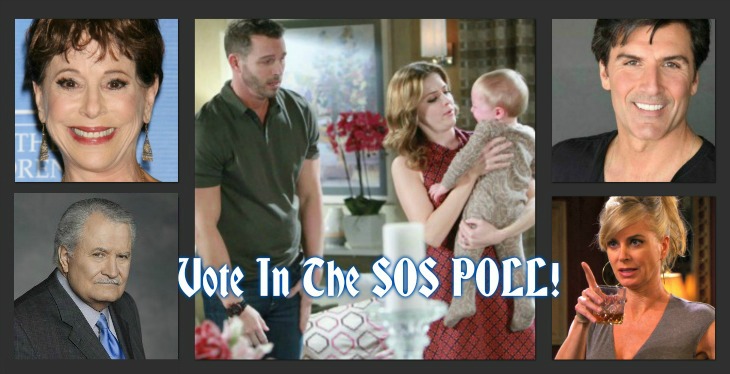 “Days of Our Lives” spoilers tease that some huge twists are coming up. Tate has been kidnapped and we still don’t know who’s responsible. Right now, Theresa (Jen Lilley) and Brady (Eric Martsolf) suspect that Summer (Marie Wilson) swiped their son. They plan on demanding some answers from the shady former Salemite.

However, the confrontation will likely just cause more confusion about the circumstances of this abduction. “Days” spoilers say Summer will swear that she didn’t take Tate, but Brady and Theresa won’t be sure that they can believe her. Regardless, someone out there ordered Tate’s kidnapping and we want to hear your thoughts on his or her identity.

First, we have the obvious choice. DOOL viewers have watched Victor (John Aniston) spew nothing but hatred toward Theresa lately. He vowed to show Brady the light and this could be step one of that scheme.

Of course, we can’t see Victor sending his great-grandson away indefinitely. That could mean that Victor’s plot was either intercepted or he isn’t to blame. Brady will grill Victor about his potential involvement, but he may not get anywhere.

In addition, the police will question Deimos (Vincent Irizarry) eventually. Deimos claims that he’s trying to change, but this plan could’ve already been in motion. We can’t forget that Deimos came to town on a mission to hurt anyone and everyone close to Victor. Deimos could’ve forgotten what he had in store thanks to all of his personal drama. He never intended on taking that river ride.

Still, it appears Deimos is meant to be a viable love interest for Nicole (Arianne Zucker) moving forward. If DOOL wants Deimos to be a decent human being, they’re going to have to keep him out of trouble for a while. Maybe that means Deimos is innocent and the accusations will just be a slight bump in the road.

A third option would be Kristen (Eileen Davidson). Many “Days of Our Lives” fans would love to see Kristen make a comeback and it would fit perfectly with this storyline. Kristen viewed Tate (aka Christopher) as her own child before Brady and Theresa retrieved him.

We’re not buying that Kristen is gone for good. No body means no death on a soap! Unfortunately, Eileen Davidson tweeted that she wouldn’t be returning to DOOL this summer. She’s either fibbing to protect the surprise or we’re not getting this epic return after all.

There have also been some rumors that suggest Vivian Alamain (Louise Sorel) could be coming back soon. If you’re not familiar with Vivian, all you really need to know is that she was one twisted individual. She was evil, but she often showed a humorous side in the midst of her dirty deeds.

Vivian had a very complicated relationship with Victor and could easily be out to get him through his family. It sounds like we’ll just have to see how this mystery unravels. Stick with “Days of Our Lives” for updates on what lies ahead.

So “Days” fans, what do you think about this intriguing storyline? Who is behind Tate’s kidnapping? Is it Victor, Deimos, Kristen, Vivian or someone else? Vote in our poll and don’t forget to check Soap Opera Spy often for the latest “Days of Our Lives” spoilers, rumors, updates and news.