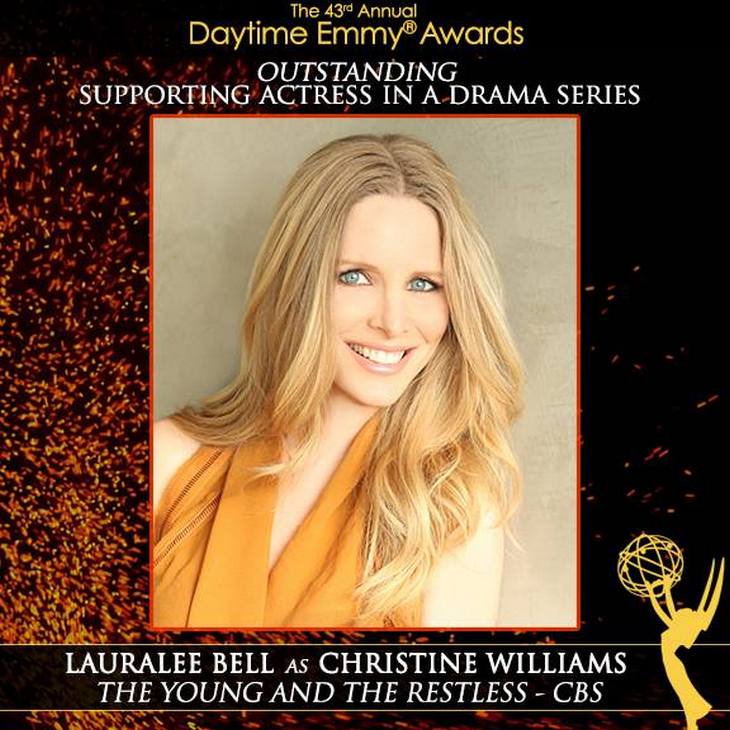 Here is more Daytime Emmy Awards news for the 2016 event. The National Academy of Television Arts and Sciences [NATAS] has released highlight reels for the Best Supporting Actresses in a Drama Series. You can watch the nominees’ highlight reels here!

Lauralee Bell as Christine Williams on ‘The Young and the Restless’ earned a spot on the nominations along with Jessica Collins as Avery Bailey Clark on ‘The Young and the Restless,’ Linsey Godfrey as Caroline Spencer on ‘The Bold and the Beautiful,’ Peggy McCay as Caroline Brady from ‘Days of Our Lives,’ and Melissa Reeves as Jennifer Horton for her role on ‘Days of Our Lives.’

Will Lauralee Bell win for her work on ‘Y&R’ as Christine Williams in the Best Supporting Actresses in a Drama Series category? Highlights include her scene in the hospital that was absolutely heart-wrenching after being hit by a car and her scene that showed Christine’s vigor for justice after losing the baby. Do you think Bell will win the Daytime Emmy Award for her role on ‘The Young and the Restless’?

Don’t underestimate Jessica Collins and her talent for bringing drama as Avery Bailey Clark in ‘The Young and the Restless.’ Collins’ reel included her torrid relationship with Joe. The abusive relationship, the lies, and manipulation pushed Jessica’s character to an amazing length.

Linsey Godfrey is another great contender for a 2016 Daytime Emmy Award. The soap star who plays Caroline Spencer on ‘The Bold and the Beautiful’ was featured for her performance during the scene in which her night of passion with Thomas was revealed along with the news he is the father of her baby.

Of course, soap opera veteran Peggy McCay as the lovable Caroline Brady from ‘Days of Our Lives’ is a favorite in her role. There is no shortage of drama as her reel replays the scene in which she comforts Shawn’s ghost and her health fears.

And finally, another ‘DOOL’ fan-favorite, Melissa Reeves as the always sweet (most of the time) Jennifer Horton. Her highlight reel details the scene in which she finds her son in bed with Eve Donovan (Kassie DePaiva). The tension, anger, and disgust are a great testament to Reeves’ versatility.

‘General Hospital’ Interview: Jackie Zeman Exclusively Dishes On Bobbie Spencer, Plus Her Role On ‘The Bay’