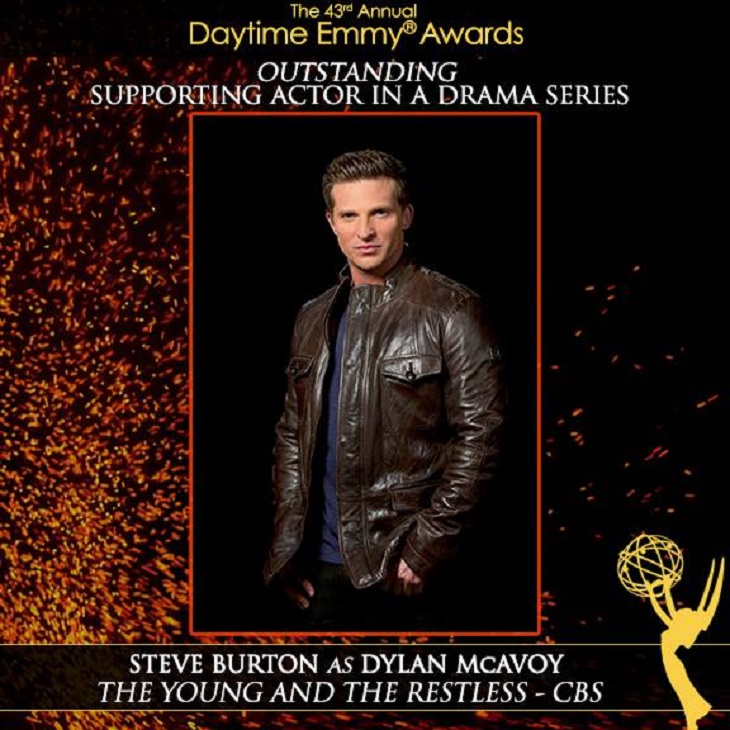 The 43rd Annual Daytime Emmys will be presented on May 1 and we wonder which supporting will take home the coveted golden statuette?

Will Bryton James [Devon] take home his first win in the Outstanding Supporting Actor category? Bryton has taken home a Daytime Emmy before for Outstanding Younger Actor in a Drama Series in 2007. Did Bryton pull off a Daytime Emmy winning performance when he confronted his father Neil Winters [Kristoff St. John] had deceived him about Hilary Hamilton’s [Mishael Morgan] disappearance?

‘Y&R’ Steve Burton [Dylan] took home the Daytime Emmy for Outstanding Supporting Actor in a Daytime Drama in 1998 for his role as Jason Morgan on ‘General Hospital.’ Was Dylan’s heart-wrenching break-up with Avery Bailey Clark [Jessica Collins] enough for Steve to win again in this category?

‘B&B’ Jacob Young [Rick] has taken home a Daytime Emmy for Outstanding Younger Actor in a Daytime Drama. The Emmy was awarded in 2002 for Jacob’s portrayal of Lucky Spencer on ‘General Hospital.’ A combined reel of Rick’s discovery that Ridge Forrester [Thorsten Kaye] was sleeping with Rick’s then wife Caroline Forrester [Linsey Godfrey] and Rick’s reaction to the shocking revelation from Maya Avant [Karla Mosley] that she was born a man could be the performance to beat for the 2016 Daytime Emmy for Outstanding Supporting Actor.

Did Dominic Zamprogna [Dante] turn in an award-winning performance as a husband who finds out his wife Lulu Falconeri [Emme Rylan] has lied to him about her whereabouts during her time with Dillon Quartermaine [Robert Palmer Watkins].

Sean Blakemore’s [Shawn] mix of anger, pain and sadness when Jordan Ashford [Vinessa Antoine] finally revealed to Shawn that TJ Ashford [Tequan Richmond] is his son may be the performance that will bring home the golden statuette for Sean as the Outstanding Supporting Actor in a Daytime Drama.