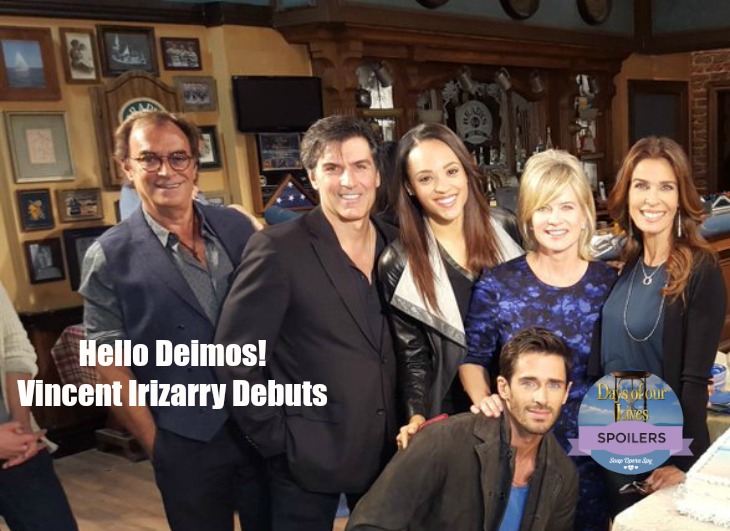 “Days of Our Lives” spoilers reveal that Caroline (Peggy McCay) will have another alarming vision about Victor (John Aniston). When Caroline gives Victor updates on her prediction, he’ll have an unusual reaction. We don’t know for sure what Caroline’s vision will involve, but it might have something to do with a new character named Deimos (Vincent Irizarry).

Deimos will arrive in Salem on January 18, so it makes sense that we could see some foreshadowing. It seems Victor has a dark secret that’s bringing Deimos to town for revenge. Soap Opera Digest just confirmed that Deimos is Victor’s brother and he recently got out of prison in Greece. DOOL rumors suggest that Victor may be responsible for framing Deimos for a crime he didn’t commit. If that’s the case, it’s easy to see why Deimos is on a mission for vengeance.

Meanwhile, things will get heated between Kayla (Mary Beth Evans) and Ava (Tamara Braun). “Days” viewers are aware of Kayla’s suspicions regarding Ava. Kayla forgave Ava for the turmoil she caused in the past, but she’s still hoping Ava will get lost. Now that Ava has dropped the baby bomb, Steve (Stephen Nichols) might feel the need to let Kayla in on the revelation.

Of course, we don’t really know if Ava’s story is legit. “Days of Our Lives” rumors hint that all of this may be a ploy to send Steve off in search of a child that doesn’t exist. Even if Steve does have an extra son out there somewhere, Ava’s primary objective is likely to wreak havoc in Kayla’s life.

DOOL spoilers indicate that this will be the first of several showdowns between Ava and Kayla. Since Tamara Braun no longer appears to be taping, we can assume that this arc will wrap within the next few months. How will Kayla manage to get Ava out of her hair? Time will tell, but it’s clear that Ava intends on stirring the pot a little more before she goes. Stick with “Days of Our Lives” to see Ava’s next move.

You might also like —>  Co-Head Writer Dena Higley Out or Returning? – DOOL Regime Change In The Works?

So “Days” fans, what do you think about the news that Victor have a strange reaction when he hears about Caroline’s vision? Does this have anything to do with Deimos? Will Kayla accuse Ava of spreading more lies? What does Ava have in store for Kayla? Voice your opinion in the comments below and don’t forget to check Soap Opera Spy often for the latest “Days of Our Lives” spoilers, rumors, updates and news.

‘The Bold and the Beautiful’ Spoilers: A Strong Marriage Crumbles – Which Couple Is on the Brink of a Breakup?