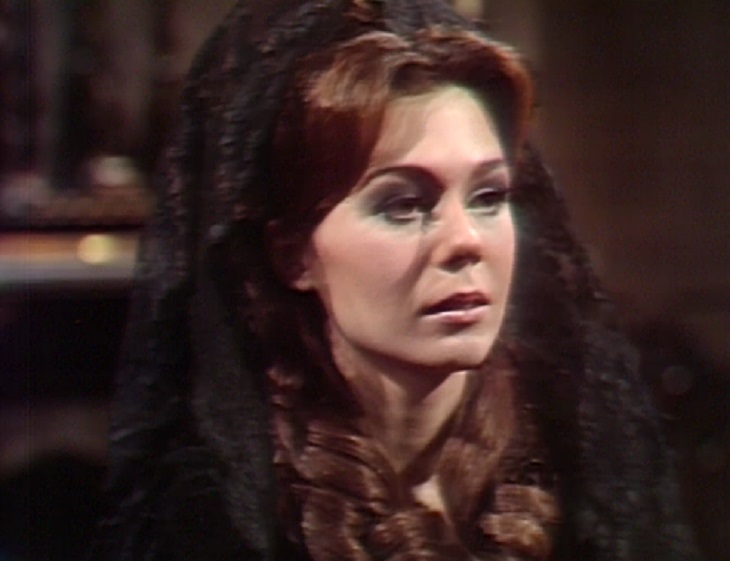 When Kathryn Leigh Scott joined the cast of the gothic soap opera ‘Dark Shadows’ in 1966 she never realized just how important a role she would play in the history of daytime dramas. Fresh out of college having studied Shakespeare, Moliere & Ibsen the actress admits being cast in the role of Maggie Evans was an actress’s dream come true.

Not only did Kathryn portray Maggie Evans, later Maggie Collins, she did the voice over for the opening credits of ‘Dark Shadows.’ Fans of ‘DS’ remember the words well, “My name is Victoria Winters. My journey is beginning. A journey that will bring me to a strange and dark place.” That place was Collinwood Manor.

Kathryn remembered that back in 1966 the soaps revolved around rather mundane topics. “Then we came along and we started time traveling. We had a vampire, witches, werewolves. We had stories from classic literature….and modern times.”

Interviewer John Rabe asked Kathryn Leigh Scott if it were true that ‘Dark Shadows’ evolved from a dream that creator Dan Curtis had. The story is true. Dan Curtis had a dream about a woman embarking on a journey by train to become a governess in Collinsport, Maine for a wealthy and quite eccentric family.

Something ‘Dark Shadows’ may not know, and Kathryn revealed this in the interview, the gothic soap opera started out as a bit of a romantic 18th and 19th century bodice ripper. When Jonathan Frid joined the cast as vampire Barnabas Collins the storylines changed forever.”

Kathryn Leigh Scott called the iconic character of Barnabas Collins the granddaddy of all paranormal and vampire stories. Primetime dramas such as ‘True Blood,’ ‘The Vampire Diaries’ and ‘The Originals’ draw their inspiration from ‘Dark Shadows’ Kathryn believes.

Why did ‘Dark Shadows’ become such a cult classic? Kathryn believes that ‘DS’ wasn’t a scary vampire story. “Of all the incarnations of these vampire stories, what so many people miss, and what Dan Curtis totally got it, is that so much of this hinges on romance. It’s not the gore and the horror.”

Kathryn is scheduled to appear at the ‘Dark Shadows’ 50th Anniversary Halloween-In-Hollywood with the Stars reunion. The event takes place Saturday, October 29 from noon until midnight. Visit the Dark Shadows Festival website for more information.