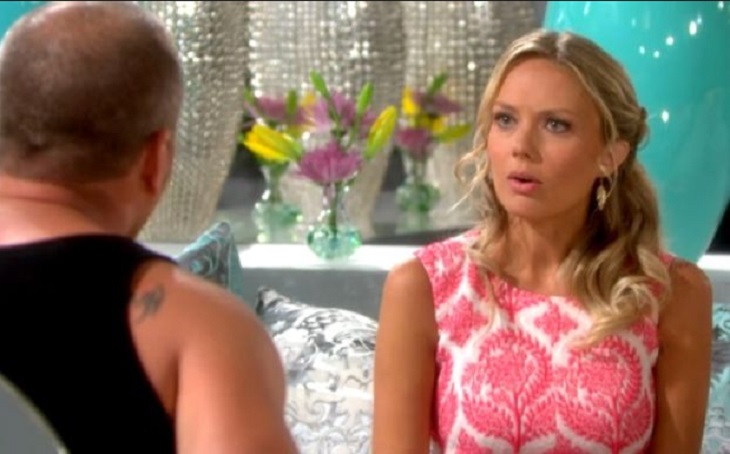 In fact, Stitch had been jonesing to tell Abby the truth for a while now – even from his hospital bed – but it was Ashley that shut it down. But now Abby will pressure Stitch when she gets suspicious and he’ll finally spill the love beans.

Abby has been oblivious and blissfully planning her wedding but it may all fall apart soon. Abby is with her parents and they’re conflicted over the joyous event. Victor Newman [Eric Braeden] wants to postpone the nuptials because of the Newman-Abbot war and lawsuit.

Ashley, however, wants the wedding to go off very soon. She’s hoping her feelings for Stitch will diminish once he’s put a wedding band on her daughter’s finger. But Ashley pushes too hard and this triggers Abby’s radar.

Abby will go to Stitch and asks what’s up. He’ll confess that he and her mom had a tender moment when they thought they were dying in the fire. When she presses, Stitch will admit he told Ashley that he loved her.

But Stitch knows that Ashley is not going to break her daughter’s heart to be with him, so he tries to make the best of this bad situation. Stitch tells Abby it was just a strange, out of context moment, when they were short on oxygen, confused and thought they’d be dead soon.

However, Abby can’t really buy that, can she? Why would love come up even if they thought they were dying unless there were some baseline feelings already there? Will Stitch be able to convince Abby that it was all a misunderstanding and that he’s all about the two of them?

Y&R spoilers indicate that the wedding will NOT be called off. The planning will continue and Victor and Ashley will each be pushing for their own agenda, but we won’t see a wedding date until 2016, perhaps for February sweeps.

And that leaves plenty of time for Stitch to grow even more conflicted about his feelings for both mother and daughter and for Ashley to be tempted by her affection for Stitch. But now Abby will be keeping a much closer eye on them both, so we can expect fireworks aplenty.

When things do blow up, Victor will hold it over Ashley’s head that she was involved with her daughter’s fiancé even though we all know Victor has done so much worse. Is there a sin “The Mustache” hasn’t committed?

Stay tuned to Soap Opera Spy for more on the unfolding Abby-Stitch-Ashley love triangle and tons more ‘The Young and The Restless’ spoilers and news.

‘The Young And The Restless’ Spoilers Tuesday December 15: Victor Blows Up On Billy – Abby Confronts Ashley Over Stitch Lies