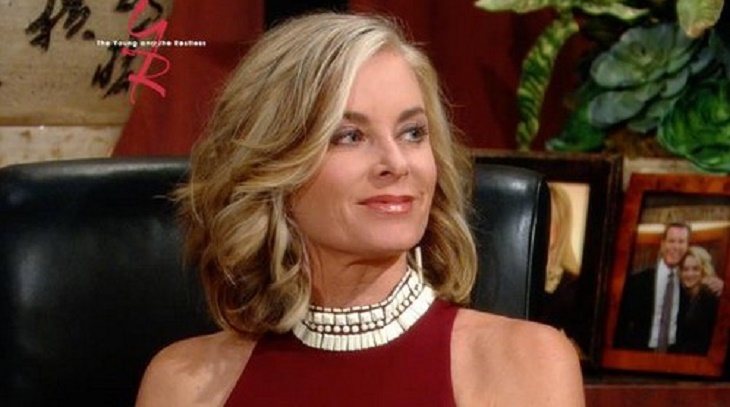 “The Young and the Restless” December 21-25 spoilers indicate that Ashley Abbott [Eileen Davidson] will be getting a visit from someone from her past, and the individual will become an ally to her and her quest to bring Jabot to greatness. There’re so many speculations about who the person could be, and the spoilers have no dropped any hints yet.

Ashley becomes faced with Jabot losing a HUGE chunk of money, and she isn’t sure what to do. On one hand, she has Jack [Peter Bergman] telling her they should fight Victor [Eric Braeden] in court. One the other, she knows Victor will NOT back down, and it could end up being a terrible, long and ugly battle.

John Abbott’s [ Jerry Douglas] ghost will visit Ashley and give her insight about how to fight Victor’s lawsuit. She values her father opinion because he created Jabot, and made it what it is today. What kind of insight will he ring for her?

Another spoiler indicated that John will tell her a person she can trust, and should bring to the Jabot team. According to the spoilers, the person she considers hiring is controversial and may create more drama with Newman Enterprises.

On social media, most fans believe that she will hire Kevin Fisher [Greg Rikaart] to combat the Internet security issues that both Jabot and Newman Enterprise lack. Unbeknownst to Ashley, Kevin developed a ground-breaking cyber spy program that allows you to spy on another company without them knowing. Is it possible Kevin will tell her, and she could have a leg up against Newman Enterprises?

One thing is for sure; Ashley will not allow Victor to take Jabot down out of anger towards Billy. She will decide to stand up, and force Billy to take the fall for his lack of judgment with Paragon if it comes to that. Who do you think Ashley will hire to help Jabot? What information will John tell his daughter that helps her in the fight against Newman?

‘B&B’ Spoilers: Sasha Shows Up with a Secret, Julius Wary of Her Motive for Being in Town – Maya Gives Zende Advice