‘The Young And The Restless’ POLL: Marisa Sierras And Noah Newman Next Y&R Super Couple? 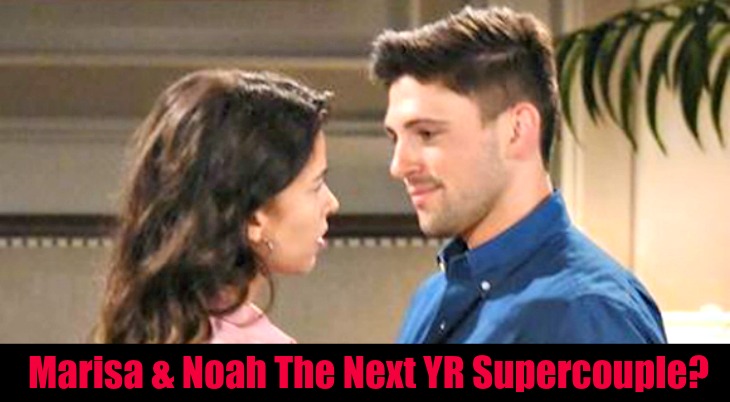 The buzz around social media is that Marisa Sierras (Sofia Pernas) and Noah Newman (Robert Adamson) could be the next super couple on “Young and the Restless.” Before Courtney’s (Kelli Goss) death, Noah didn’t have much of a storyline, other than to support his parent’s dialogue in the family. Lately, the writers have started giving him more of a storyline- leading up to the assumption that he would be paired with a leading lady in order to reach super couple status. Is it possible that Marisa and Noah could be the next ‘it’ couple?

When you think about Marisa, she is much like a young Sharon Collins (Sharon Case). She’s had a difficult life and could not care less about the money. The thing she desires more than anything is a real relationship- a healthy relationship. She has lied and done things she is not proud of, but in soap land that pretty much applies to everyone. She seems to care about Noah, and she isn’t afraid of Victor Newman (Eric Braeden). In that regard, she is already ahead of the game.

Noah Newman has lived a very sheltered life. He doesn’t know what it is like to really struggle in life. He has been through quite an emotional journey in his short life. When he was a child, his older sister died. It caused his happy home to be destroyed by his father’s infidelity. Years later, his baby sister, Faith was kidnapped by Adam Newman (Justin Hartley). Eventually, the secret came out that Faith was alive and returned to Sharon. A couple of years after that, his mother was diagnosed with bipolar disorder after she set fire on his grandfather’s ranch. He stood by her when no one else would. He is much like his father, with one exception. He can forgive others for past mistakes. Nick seems to think he is some sort of angel on earth.

It really seems like the show wants to revisit the Sharon and Nick pairing, but with their son. Many feel that Shick has been attempted too many times and never works out in the end. Sharon’s secrets and Nick’s wandering eye always came between them. Will Marisa and Noah patch things up? Could they be the next “Young and the Restless” super couple?