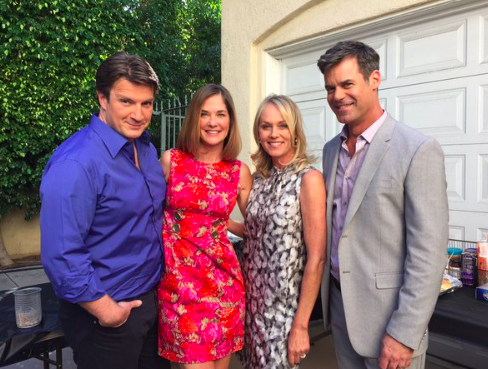 There are not any confirmed details regarding DePaiva’s, Watkins’s and Vogel’s guest appearances, but it is believed the actors will be featured on episode 10. This will be the second episode to air after “Castle” returns to its Monday night spot at 10 p.m. following winter hiatus.

Speculation is that Watkins and DePaiva will play a married couple who get pulled into a murder investigation with Nathan’s character Richard Castle. There isn’t any current information about the character Vogel will play.

Kassie DePaiva shared the news with fans via Twitter, “ONE LIFE TO LIVE is back!!! Just kidding! Shooting #castle @NathanFillion @tucwatkins #oltl.”

Tuc Watkins also shared the news of the “OLTL Reunion” on Twitter. Watkins posted a photo of the four former co-stars with an arrow pointing at himself and highlighting “ME!”

Last but not least Nathan Fillion shared the news that Kassie, Tuc and Darlene were joining him for an episode of “Castle.” Nathan’s tweet, “22 years ago, I was 22 years old, and working my ass off with these two. Thanks for doing this, you guys.”

For fans of “One Life to Live” this is as close as it gets to an “OLTL” reunion as possible. It would be great to see more of Kassie DePaiva, Tuc Watkins and Darlene Vogel on the hit ABC primetime drama “Castle.” Is it possible the trio may sign on for recurring roles?

22 years ago, I was 22 years old, and working my ass off with these two. Thanks for doing this, you guys. https://t.co/WZi9ByJM7u