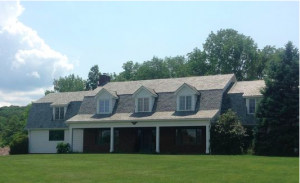 Sad news for fans of the “Guiding Light” – the Dutch Colonial house that served as the front exterior of the Spaulding home – as well as the interior dining room – is scheduled to be auctioned to the highest bidder. The 4,543-square-foot, four bedroom house is set on 32 acres of land. It is known by locals as the Betsy Komline House.

Max Spann Real Estate & Auction Co. is handling the auction – which will begin at 11 a.m. at the Peapack-Gladstone Municipal Building located at 1 School Street, Peapack, New Jersey September 29, 2015. According to Bob Dann, executive vice president and chief operation officer for the auction house, the Betsy Komline House was chosen by the producers of “Guiding Light” because of its homey feel and the gorgeous exterior views offered by the 32-acres of parkland surrounding it. The winner bidder will not only become the owner of a beautiful home, but also a piece of television history.

The Guinness Book of World Records lists “Guiding Light” as the longest-running television drama. The soap opera got its start on January 25, 1937 as a 15-minute show on NBC radio. Set in the fictional town of Springfield, “Guiding Light” found its television home on CBS in 1952. The daytime drama revolved around the Spaulding, Lewis and Cooper families. Proctor & Gamble Productions – owners of the show – announced the cancellation of “Guiding Light” in May 2009 and its final episode aired on September 18, 2009. Changes in viewership were blamed for the soap’s cancellation – which had the lowest ratings of the eight soap operas still airing in 2009. By 2011 those eight soap operas had dwindled to four.

With the auctioning off of the home that was part of the setting for “Guiding Light” it feels as if the final door has been not only closed by bolted shut. An impressive list of actors got their start on “Guiding Light” included Kevin Bacon, Calista Flockhart, James Earl Jones, Taye Diggs and Hayden Panettiere. Now, it really is all just soap opera history. We wish the bidders well and hope the incredibly large home and its beautiful grounds is purchased by a family who will love it as much as the fictional Spaulding family and viewers of “Guiding Light” did.

‘The Bold and the Beautiful’ Spoilers: Watch The B&B Video Preview For Friday September 11 – SEE IT HERE!