‘General Hospital’ Spoilers Week of July 20: Imploding Relationships, Back from The Beyond, Fresh Starts and Sad Stops 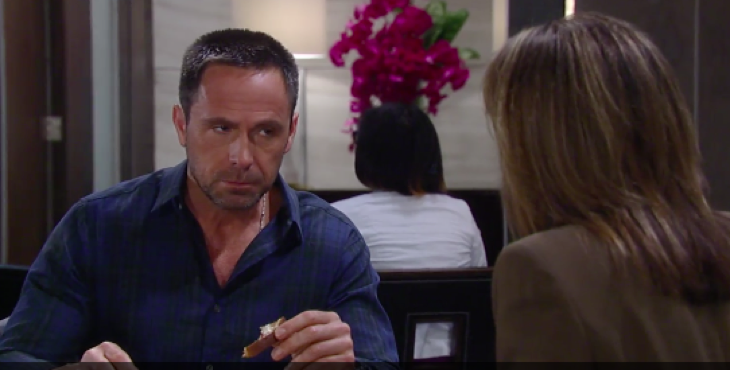 There are a number of major storylines moving in Port Charles, so tune in this week. To get you started, here are some juicy ‘General Hospital’ spoilers for this week July 20th thru July 24th.

Dante Falconeri [Dominic Zamprogna] and Valerie Spencer [Brytni Sarpi] are on the hot seat. Lulu Spencer [Emme Rylan] – who doesn’t even know the extent of what Val and Dante did – comes to get in Valerie’s face about making a move on her man. Then Dante gets a lecture from Commish Jordan Ashford [Vinessa Antoine] for sleeping with a co-worker. Valerie is heartbroken since she really has feelings for Dante and he’s struggling because he feels horribly guilty.

Dante unburdens himself to Nathan West [Ryan Paevey] but will Nathan tattle to Maxie Jones [Kirsten Storms]? If he does, you know Lulu will soon find out that Dante and Val did not stop at a kiss. Also imploding are Luke Spencer [Anthony Geary] and Tracy Quartermaine [Jane Elliot]. Dillon Quartermaine [Robert Palmer Watkins] tries to convince Tracy that Luke had good intentions but she’s over it.

Tracy would rather keep casually shagging her ex Paul Hornsby [Richard Burgi] than accept Luke back in her life. Luke and Lulu also commiserate about their troubled relationships as he meets with his daughter to tell her little Jake Spencer [James Nigbor] is alive and she tells him how chasing after her kidnapped brother may cost her marriage to Dante. The Spencers are certainly unlucky in love this week and Lulu doesn’t even know just how bad it really is.

Back from the Beyond

Hayden Barnes [Rebecca Budig] is soon coming back from what looked like certain death. It will take more than a bullet in the head to keep her down. Her awakening promises trouble for several people. Is it the secret that Jake Doe [Billy Miller] is Jason Morgan or that Nikolas Cassadine [Tyler Christopher] had Hayden shot that Laura overhears? Either way, she’s got a story to tell Scotty Baldwin [Kin Shriner] about someone being back from the beyond.

Related: ‘General Hospital’ Poll: Who Will Make it Down The Aisles and Get Married During GH Wedding Season?

Also back from the beyond is little Jake who Liz Webber [Rebecca Herbst] takes to General Hospital to see Patrick Drake [Jason Thompson] for a full workover to make sure he’s healthy. After Patrick gets past his shock that the kid is alive, he’ll assure Liz that he’s healthy as a horse and has both his kidneys. So where did Josslyn Jacks [Hannah Nordberg] get her new organs? Carly Corinthos [Laura Wright] wants to know and will bring Joss in for another check up once she knows Jake is alive.

Liz is feeling guiltier and guiltier about keeping the truth from big Jake about his identity and that little Jake is really his son. Also back from the dead is Ava Jerome [Maura West] and she’s about to break her daughter Kiki Jerome’s [Hayley Erin] heart even though Kiki thinks it’s her Aunt Denise. Morgan Corinthos [Bryan Craig] and Denise/Ava can’t keep their hands off each other and it’s going to kill Kiki. Franco [Roger Howarth] urges Ava to come clean with Kiki about being Ava and about Morgan too.

Nikolas tries to explain his actions regarding ELQ to his mother Laura. She’s not happy that he’s channeling true Cassadine evil and wants to know if he knew about Jake. Nik claims he didn’t and that he took over ELQ to benefit both the Cassadines and the Quartermaines. The prince may even offer his mom a job at ELQ which will annoy Tracy endlessly since she feels like she’s lost too much to Laura already. Laura will also find out about Nik’s other more shady plots of late, but will stick with him.

Luke and Laura get together to talk about the fall out from their actions – recent ones and ones from years past as they have their final goodbyes with Luke’s last day on July 27th. Luke also gets a visit from Michael Quartermaine [Chad Duell] about the AJ Quartermaine Clinic he wants to build on the site of the old Spencer house. Luke will consent but wants one last look at the old place. While there he gets a visit from three ghosts. His mother, his sister and his dad will stop for a spooky session.

After an attack on the Corinthos compound, everyone in town assumes it was Julian Jerome [William deVry] that did it, but he maintains his innocence and insists that he really is out of the mob for good. Alexis Davis [Nancy Lee Grahn] was with Julian at the time of the attack, but that can be rigged. He may have even used her as an alibi. Both Sam Morgan [Kelly Monaco] and Alexis will thoroughly grill Julian on the subject. But was it Ava instead that made the move?

And Brad Cooper [Parry Shen] has been keeping a major secret from Lucas Jones [Ryan Carnes]. A nurse gets the goods and blabs some juicy Brad-related gossip to Lucas who has confront his sweetie. Brad will then feel like he has no choice but to call off their nuptials because of his family drama. Is Brad already married? Was he forced into an arranged marriage at some point? Or is he still in the closet with one side of his adopted/biological family?

And just as Nathan has a romantic night planned with Maxie, his mom Madeline Reeves [Donna Mills] shows up. Nathan may be considering a new start to their relationship via a proposal, but Maddy wants to put a hard stop to it. She doesn’t think that Maxie is good enough for her boy. Yet Maddy thinks it’s okay to sleep with her daughter Nina Clay’s [Michelle Stafford] husband Ric Lansing [Rick Hearst] and gaslight Nina into insanity. She certainly won’t win any mother of the year awards…

This is Luke’s last full week in Port Charles and we’re counting down the time until Jake Doe knows who he is, so there will be lots of revelations this week. Don’t miss an episode and come back to Soap Opera Spy daily for more ‘General Hospital’ spoilers, gossip, and news.

‘The Young and the Restless’ Interview: Nicole Gadbois, Mother of Twins Playing Connor Newman Tells All