‘The Young and the Restless’ Interview: Nicole Gadbois, Mother of Twins Playing Connor Newman Tells All 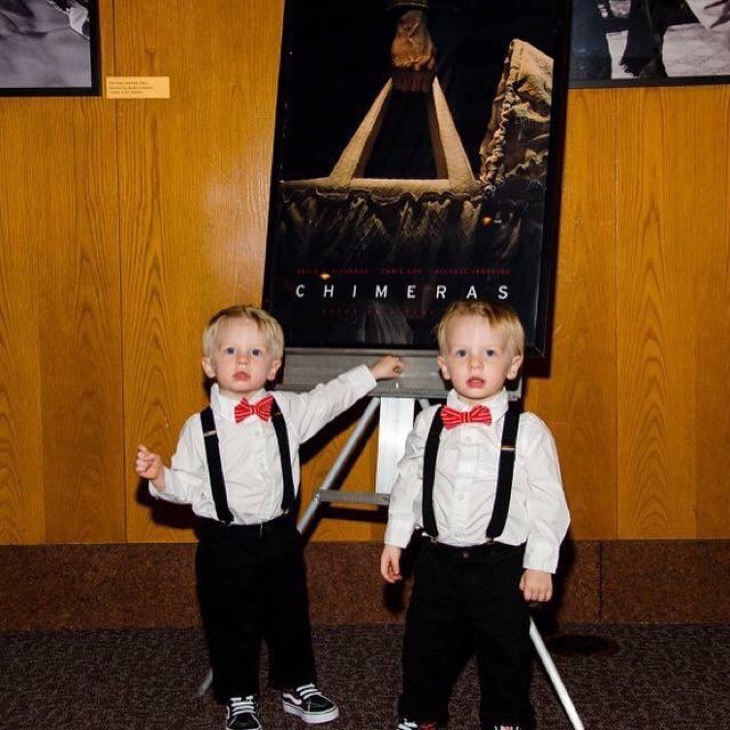 If you are a fan of the popular Daytime Soap “The Young and the Restless” you are already a fan of the adorable young actors, Gunner and Ryder Gadbois who play Chelsea Lawson [Melissa Claire Egan] and Adam Newman’s [Justin Harley] adorable son Connor.

These young actors are so exceptionally talented and moving they almost steal the scene from the adults and we are sure they have an amazing future in acting ahead of them.

The twin’s mother Nicole Gadbois was kind enough to take sometime out of her and the boys busy schedule to answer some questions for Soap Opera Spy.  Check out the interview below:

When did the twins start filming?

The boys started filming for Y&R in April 2015

How old are the twins?

They are 21-months old

Do they have any other siblings?

No, its just them.

How many hours a day do they work?

We are typically never on set longer than 2 hours a day.

How do you figure out each day, which one of your twins plays Conner Newman. Is it up to you or the producers?

It is up to me. When we get on set and go into their dressing room we decide who is in the best mood that day. That’s the beauty of using twins.

Do the twins enjoy filming?

They absolutely love it!

What do the boys love to do for fun?

They love climbing on everything in sight, jumping on their trampoline, riding their ATV’s with dad, Dancing (they can really get down), and last but certainly not least Disneyland.

With their filming schedule do you have time to go on family trips, if yes, where have they been recently?

Yes we do, last summer we went to San Francisco. We aren’t sure where we are taking them next but it’s definitely in the works!

Do they have any favorite toys they love to play with?

They love their cars and trains.

What do they enjoy watching on television?

They love Mickey Mouse and I also let them watch their scenes on The Young and the Restless.

Have the boys ever done any other acting prior to landing their part on Y&R?

Yes! They actually began their career when they were 2 months old. Their first job was for the tv show Parks and Recreation. Since then they have worked on 9 tv shows including The Mindy Project and True Blood. They have also made 3 commercials. Their first commercial was a AAA commercial called “Emma” where they played a newborn baby girl. Their second commercial was the Skittles Superbowl commercial called “Settle It” and they also have filmed a Pampers commercial! Other than that they filmed their first movie “Chimeras” last summer and did an internet job for Ergo baby carriers.

How did the boys get involved in acting?

My friend, who also has identical twins, told me that we should sign them up once they were born. Twins are in a high demand due to labor laws and how long children can be on set. My husband and I were actually hesitant because we didn’t know much about the industry. We decided to give it a try and it’s the best decision we have made for their futures. The experiences their agency, Paloma Model and Talent, has provided them have been beyond our wildest imaginations. We are truly blessed.

Are they currently working on any other projects?

Not at this moment. Their focus is definitely Y&R

What sort of acting roles do you hope your boys get in the future?

I would love longevity with Y&R. They are hands down the best cast and crew the boys have ever worked with. I would love to see my boys score some more big commercials too!

What is the most extreme change for the family, and the twins, since they have landed a role?

I think the attention and the schedule change. Their call times vary from day to day so sometimes their schedules are thrown off but they are so laid back that it doesn’t bother them.

Have they ever have a bad day during filming?

No they haven’t. If one is fussy or slightly moody, we just send the other baby down to set. So far no issues and we hope to keep it that way!

How many performances have they done for Y&R, so far?

So far they have filmed 8 days for Y&R.

How do they prepare for the role of their character?

At home I put on Y&R and tell them “Look, there is your tv mom and tv dad” so they are familiar with them. I think it helps!

What made you decide to have your twins become actors?

It honestly was never a thought in my mind until my friend mentioned it to me. On a whim we decided “what the heck, lets try it“

What is your favorite role that your boys have played so far?

Y&R is by far the most rewarding. All of their other jobs were just 1,2 or 3 days long so they didn’t get to connect with their fellow actors. On this show, they are able to bond and connect with Chelsea and Adam which is an amazing thing to witness on set and on tv.

Where do you live with your family?

We live in the Inland Empire in Southern California.

Did you twins ever go to any acting training?

No, maybe once they are older if they want to continue in this business.

What was the most important scene to you, and why?

The reveal episodes that are currently airing. The chemistry of Chelsea, Adam and Connor and how it comes together is just incredible. I get chills on set while I watch it being filmed and chills again watching it once it airs.

Do the boys favor any of the actors or actresses off film?

They truly enjoy everyone they meet on set, they are really easy going. They film with Melissa and Justin 99% of the time so they love them since they are familiar with them. The other day we were leaving set and the boys saw Melissa and Justin, Ryder started waving, laughing and sticking his tongue out at them. It’s too cute.

Sean Carrigan is one of the nicest people. He always offers to carry the boys toys up to their dressing room.

We will be touching base with Nicole Gadbois soon to give you more updates on Gunner and Ryder.  Don’t forget to tune in to “The Young and the Restless” to catch Gunner and Ryder Gadbois!

‘General Hospital’ Spoilers Week of July 20: Imploding Relationships, Back from The Beyond, Fresh Starts and Sad Stops

‘The Young and the Restless’ Trivia: How Well Do You Know YR’s Ashley Abbott?