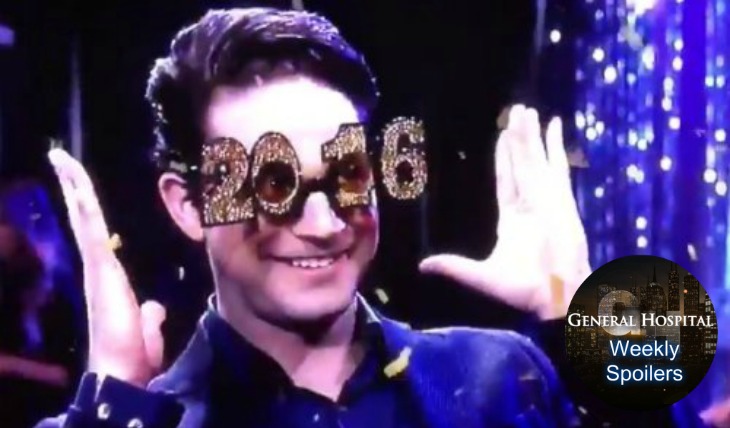 ‘General Hospital’ (GH) spoilers for the week of Monday, December 28 thru January 1, 2016 indicate there will be romance, a proposal, dark deeds and blackmail. Check out what’s coming for the last days of 2015 and the start of the New Year in Port Charles.

First, Nikolas Cassadine [Tyler Christopher] will be back from the brink of death and intent on using the assault as leverage against Jason Morgan [Billy Miller]. Hayden Barnes [Rebecca Budig] is on Nik’s side for now, but may not be once she learns the truth about her shooting this week.

Jason feels like a monster over the attack against Nik and other violent acts. He’ll have a sit down with Damien Spinelli [Bradford Anderson] who reassures him that he’s not a monster, just a guy with certain skills he puts to work to protect those he cares about.

Jason will also have a chat with Robin Scorpio [Kimberly McCullough] that could be more persuasive in helping him see he’s not all bad. Meanwhile Jason’s spurned honey Liz Webber [Rebecca Herbst] tries to get Nikolas not to prosecute Jason.

Jason’s other honey Sam Morgan [Kelly Monaco] catches up with Patrick Drake [Jason Thompson] who is firmly reunited with Robin. In fact, GH spoilers hint that Patrick may propose to Robin and they may get hitched by New Year’s.

Sabrina Santiago [Teresa Castillo] asks Michael Quartermaine [Chad Duell] if he’s going to be there for her and her baby. Will Michael step up or step away? Someone will be hurt – either Sabrina when she gets dumped or Michael’s family to hear the baby isn’t his biologically.

Mac Scorpio [John J York] tells Anna Devane [Finola Hughes] that he got the proof that Kyle Sloane [Robb Derringer] is dead – the DNA results are back – the body passed off as Carlos Rivera [Jeffrey Vincent Parise] is the former PCPD chief.

This means trouble for Paul Hornsby [Richard Burgi] who is also dealing with a crisis at home with Tracy Quartermaine [Jane Elliot]. Tracy is furious she caught him shagging Ava Jerome [Maura West] and wants him out of her house and she threatens to expose him.

Morgan Corinthos [Bryan Craig] will also be in trouble when he overhears his dad Sonny Corinthos [Maurice Benard] talking business and goes where he shouldn’t be. Morgan ends up in danger – who will bail him out?

You may also like –> Liz Begs Nik To Help Jason – Sam Finds Patrick With Robin – Tracy Blasts Paul, Throws Him Out

Morgan chats with Kristina Corinthos [Lexi Ainsworth] who shares her school secret with Morgan. They both share some revelations and agree not to tell their parents about their woes. What’s going on with Kristina?

Soon Valerie Spencer [Brytni Sarpi] is in trouble thanks to the scheming of Lulu Spencer [Emme Rylan] and Johnny Zacchara [Brandon Barash]. Valerie wants to get closer to Dante Falconeri [Dominic Zamprogna].

They made plans to watch football on New Year’s but it looks like Valerie could end up at The Floating Rib watching the game with Dillon Quartermaine [Robert Palmer Watkins] instead. Where’s Dante?

Other New Year’s action occurs between Johnny and Lulu – Johnny goes in for the kiss. Will Lulu reciprocate or shun Johnny? Franco [Roger Howarth] is ready to get intimate with Nina Clay [Michelle Stafford]. Will they finally get some alone time?

And Sam and Jason end up at a New Year’s Eve celebration together and things look awfully intimate between them. Will they have a kiss that could launch a new love between them? Will Liz be left out in the cold as Port Charles rings in 2016?

Be sure to watch GH Monday through Wednesday but then Thursday, December 31 is a rerun and there’s no show at all on New Year’s Day due to a preemption. But check back with Soap Opera Spy every day for tons of juicy ‘General Hospital’ spoilers and news.