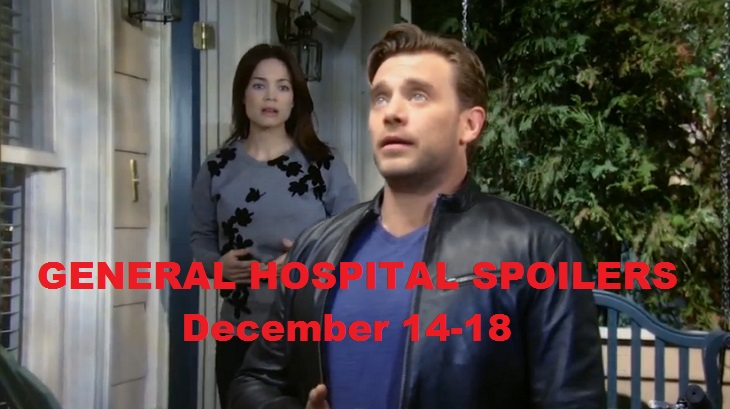 On Monday, December 14, Jason goes to talk to Liz Webber [Rebecca Herbst] who thinks he’s come back to her. He has not. Later, Jason heads to The Floating Rib and assaults Nikolas who is taken off guard. Nikolas was trying to get answers from Hayden Barnes [Rebecca Budig] then Jason attacks.

Dante Falconeri [Dominic Zamprogna] has some regrets about messing up his marriage with Lulu Spencer [Emma Rylan] and talks to her. Lulu is calm, but inside, she’s seething and focused on her plot with Johnny Zacchara [Brandon Barash] to do something terrible to Valerie Spencer [Brytni Sarpi].

On Tuesday, December 15, Dante plays good guy and tries to get someone else’s life back on track. Is it drunk-driving Kiki Jerome [Hayley Erin] or perhaps his wayward bipolar brother Morgan Corinthos [Bryan Craig]? Carly Corinthos [Laura Wright] goes on a rampage against Liz over at GH.

Franco [Roger Howarth] hears Carly tearing Liz a new one and comforts her when it’s done. Franco has some insight on being seen as a villain. Laura Spencer [Genie Francis] cautions Lulu not to do anything crazy. Johnny kicks off the Valerie scheme and sets up an incident so he can intervene and save her.

Tracy Quartermaine [Jane Elliot] realizes she’s falling for rogue ex-hubby Paul Hornsby [Richard Burgi]. Ava Jerome [Maura West] tries to get someone to listen to her – is it Paul or Kiki? Mac Scorpio [John J York] and Anna Devane [Finola Hughes] get some info on Paul’s motivations and personal life.

On Thursday, December 17, Patrick calls in backup in the search for Robin. Anna and Robert Scorpio [Tristan Rogers] join Patrick and Emma in the rescue mission. Jason is torn between his past and present and Liz and Sam Morgan [Kelly Monaco]. What should he do?

Liz, Jason and Sam have a tense talk. Dillon Quartermaine [Robert Palmer Watkins] and Maxie Jones [Kirsten Storms] remember Georgie Jones on the anniversary of her death. Looks like Nina Clay [Michelle Stafford] and Maxie have a big plan for Crimson that involves Dillon.

On Friday, December 18, Robin’s loves ones figure out what’s happened to her and it’s not good news – Patrick Drake is shocked. Julian Jerome [William deVry] has a serious talk with Kristina Corinthos [Lexi Ainsworth] and Molly Lansing Davis [Haley Pullos] – is he preparing to propose?

The big GH Nutcracker Gala kicks off. Sam finds time to open up to Jason about a secret she’s been keeping. Carlos Rivera [Jeffrey Vincent Parise] can’t stay away from Sabrina and decides to hide in plain sight. Who is Sam’s shocking date to the gala that sets Port Charles’ tongues wagging?

All this and so much more on General Hospital in the week of December 14 through 18. Watch then come back to Soap Opera Spy often for more ‘General Hospital’ spoilers, gossip and news.