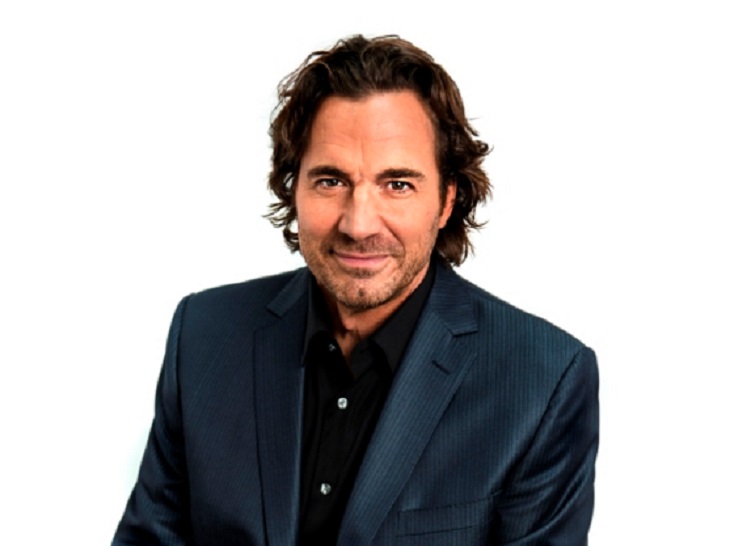 “B&B” superstar Thorsten Kaye [Ridge Forrester] sat down with Soap Opera Digest for a short interview. In the chat, Kaye revealed his favorite past time on a plane, how he spends his free time, and who can make him laugh on the set.

Kaye has stated in a few interviews that he travels each week from New York [home] to Los Angeles to film “B&B.”  In one interview, he implied the traveling was becoming to be a hassle, and many fans wondered if he was considering leaving the soap opera. Thorsten explained when he is in L.A. he misses his family terribly, but when he is New York, all he can think about is missing the money he makes while working in L.A.

Thorsten’s favorite past time on a plane is trying to get free beers. The ‘B&B’ star said that he traveled so often that the flight attendants know him by name. Sometimes, he can get a free beer or two if he is lucky. “It’s like a game to see if you can have two or three beers, and hope they’ll charge you for one,” Thorsten laughed.

Kaye stated every Sunday, he watched a football game—usually Miami Dolphins—and hopes they can pull off a win. He noted that he had been a fan of the Dolphins for years, even though lately supporting the Miami team isn’t easy. Thorsten was also asked by Soap Opera Digest which co-star can make him laugh. Kaye stated John McCook had a great sense of humor and keeps him on his toes on the set. “John doesn’t tell jokes exactly. He tells you something that you will only catch if you really listen to him. I love him,” Thorsten explained. He praised John for being a soft-spoken and gentle soul.

Related: Sasha Shows Up with a Secret, Julius Wary of Her Motive for Being in Town – Maya Gives Zende Advice

Thorsten Kaye has another big year planned moving in 2016—with many twists and secret revealed in his convoluted storyline. Bradly Bell promised Thomas Forrester [Pierson Fode] will find out that he is the father of Caroline’s [Linsey Godfrey] baby. Do you think Ridge will eventually spill the news to Thomas in a heated exchange?