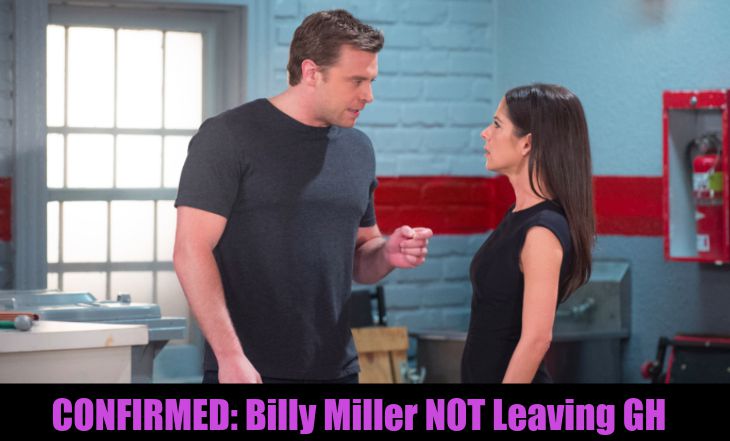 Soap opera fans have all heard the rumor by now. Billy Miller is quitting “General Hospital” to reprise his role of Billy Abbott on “Y&R.” It seems that certain media outlet keeps posting the news over and over, and reporting it as a fact. According to ABC, it is nothing but fan fiction created by an overzealous super fan.

Over the past six months, rumors have swirled that Billy Miller was leaving “General Hospital” after his contract with the show was up in October. And, that’s not all, certain media outlets reported that he was moving back to “Y&R” to reprise is his role as Billy Abbott. Today, ABC executive, Nathan Varni confirmed that Billy Miller is not going anywhere.

Over the past couple months, there have been multiple news reports that Billy Miller was considering leaving the ABC soap opera. They have cited reasons from not getting along with the cast to be overall not happy with the material written for Jake. One fact that you can’t dispute, “GH” can’t get rid of him now- the big Jason reveal hinges on Billy Miller.

After months of speculation and rumors, ABC let the fans know that they can rest assured Billy Miller was sticking around. Burgess Jenkin will stay in the role of Billy Abbott on “Young and the Restless. “Fans had a hard time accepting Jenkins in the role of Billy Abbott. The problem keeps coming up is Billy Miller was a perfect Billy Abbott. When you think of what Billy Abbott is, you immediately have a vision of Billy Miller. He embodied the perfect Billy. He chose to leave the role and pursue other career opportunities- and as his fans, you must support him in that. And, please don’t discount that Burgess Jenkins has worked hard to make the role his own.

So soap fans, there you have it; Billy Miller is not leaving “General Hospital.” He will stay on and see the Jason reveal to the end. And, “Y&R” fans, you have to embrace and accept Burgess Jenkins, because it looks like he’s there for the long haul.

‘The Young and the Restless’ Spoilers: Watch The YR Video Preview For Thursday September 10, 2015 – SEE IT HERE!