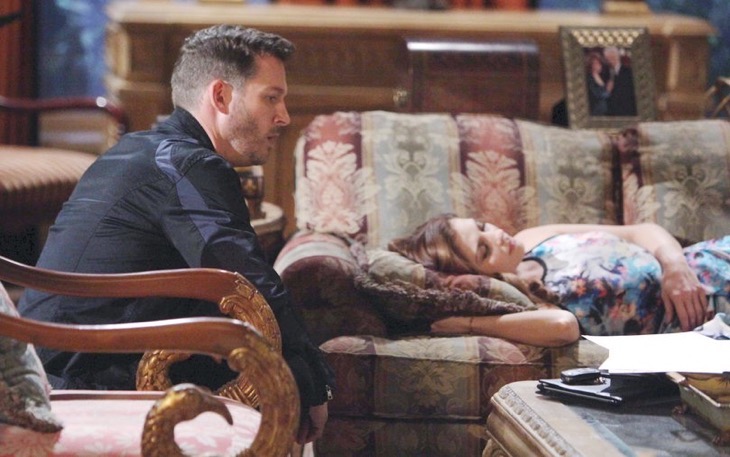 “Days of Our Lives” spoilers reveal that Brady (Eric Martsolf) and Theresa (Jen Lilley) could soon have something else to bond over. DOOL viewers know that Theresa is constantly falling in and out of favor with Brady. Brady was impressed by Theresa’s career goals, but disappointed when she impulsively stole a kiss. Then, Brady was sympathetic to Theresa’s sorrow over Paige’s (True O’Brien) death, but he scolded her for her attitude toward Jennifer (Melissa Reeves) and JJ (Casey Moss). A few minutes later, Brady approved when Theresa changed her tune. Round and round we go.

Related: What Were Your Favorite And Least Favorite Storylines For the Week of September 28, 2015?

It’s clear that Brady isn’t entirely buying Theresa’s new outlook and he has every right to be cautious. This is the same woman that essentially tricked a drunk Brady into marrying her and put John (Drake Hogestyn) in a coma by whacking him with a fireplace poker. However, that was before Tate came into their lives. Theresa may not be perfect, but she truly loves Tate and she wants to be a good mom. In fact, Tate may be what ultimately brings Brady and Theresa together.

“Days of Our Lives” spoilers say these parents will start to worry when something appears to be wrong with their son. DOOL rumors hint that they may be blowing this out of proportion, but they have to take it seriously considering Tate’s medical history. The silver lining of this crisis may be that Brady will begin to see Theresa’s softer, maternal side. Many “Thrady” shippers are hopeful that they’ll grow closer in the coming weeks.

Related:  A Clue Surfaces That Forces Ben to Take Action – Will Murdered Because He Knows Too Much

Meanwhile, a health crisis will emerge for a different Salemite as well. “Days” spoilers tease that Chad’s (Billy Flynn) current ordeal will take a toll on Abigail (Kate Mansi). Abby will become so stressed out by the whole thing that she’ll probably end up in the hospital. Chad definitely appreciates Abigail’s help, but he won’t want her to put her child’s life at risk. It looks like Abigail will need to let Stefano (Joseph Mascolo) and Andre (Thaao Penghlis) take it from here. Stick with “Days of Our Lives” to see if the DiMera men can prove Chad’s innocence.

So “Days” fans, what do you think about the news that Brady and Theresa will fear Tate has something wrong with him? Will they make some updates to their relationship? What about Abigail’s health crisis? Will Abigail’s baby be in danger? Let us know what you think in the comments below and don’t forget to check Soap Opera Spy often for the latest “Days of Our Lives” spoilers, rumors, updates and news.