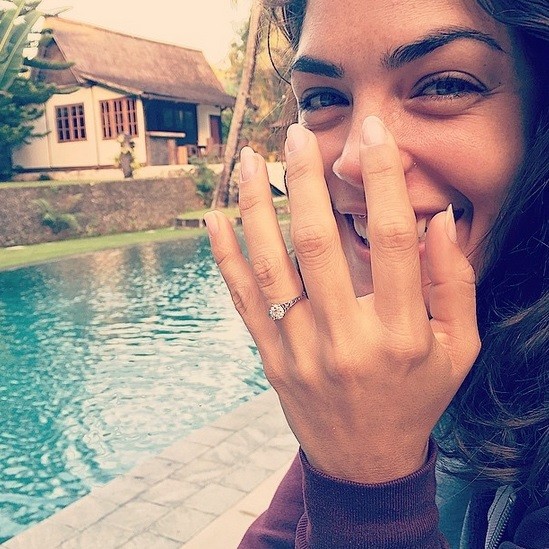 Love is in the air for actress Kelly Thiebaud, best known for playing the role of Dr. Britt Westbourne on the popular daytime soap opera General Hospital. Thiebaud has confirmed, via her Twitter account, that she is engaged to Bryan Craig. Kelly and Bryan first met on the set of General Hospital a couples years ago and have been going strong ever since.

Bryan Craig first announced the engagement in the afternoon of Sunday, June 26, on his Instagram and Twitter pages. Craig posted a photo of Kelly Thiebaud on his Instagram page that show Kelly radiating happiness and smiling from ear to ear, all while showing off her new engagement ring. Craig captioned the photo, “She said yes!!! #myfiancee”

Then, a little over an hour later, Kelly Thiebaud finally opened up about the engagement and confirmed it via her official Twitter profile. Of course, Thiebaud did not really have a choice as fans flooded Bryan Craig’s Instagram page asking questions about the engagement, and offering their best wishes to the newly engaged couple.

Thiebaud took to Twitter to a release a short statement regarding her engagement. She writes, “Best day of my life. We’re engaged!!!” the actress exclaimed in all capital letters. Kelly Thiebaud goes on to say, “My heart is exploding!!!! Love is a wonderful powerful undeniable thing. I’m crazy stupid in love.”

The news of Kelly and Bryan’s engagement comes only 13 hours after Kelly Thiebaud posted a tweet that read, “First night in Bali. Can’t believe we’re here…” The couple is currently in Bali celebrating their two year anniversary, which Bryan felt was the perfect time to pop the question. We totally agree with his decision and obviously Kelly agreed as well!

We are overjoyed for both Kelly Thiebaud and her fiancee Bryan Craig, and want to congratulate them on their two year anniversary, as well as their engagement. We wish them many more years of great experiences to come.