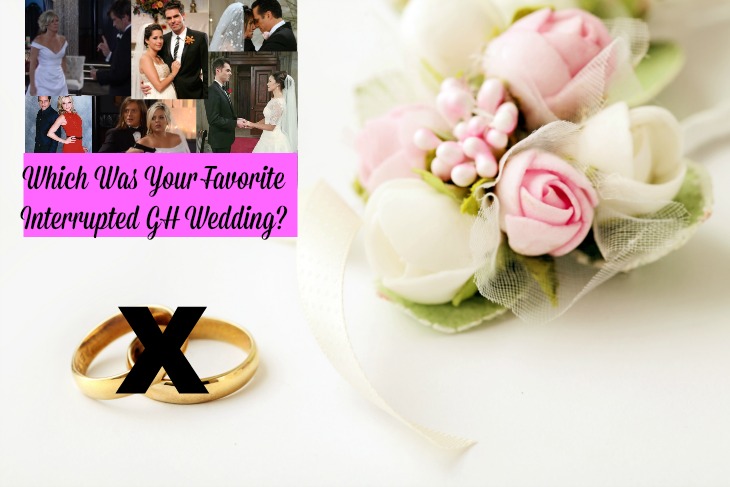 Weddings are great, particularly on General Hospital, but what’s even better are nuptials interrupted by some crazy drama. Here are six Port Charles weddings that crashed and burned for a variety of wild reasons. Check these out then votes for your favorite in the poll below! 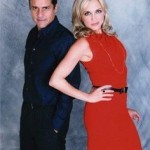 Connie Falconeri/Kate Howard [Kelly Sullivan] and Sonny Corinthos [Maurice Benard] were high school sweeties but she ditched him back in the day. She came to Port Charles as Kate and reignited things with Sonny. She was shot by Sonny’s kid Michael Quartermaine [Chad Duell] but they got engaged anyway. Then on their big day, Anthony Zacchara [Bruce Weitz] shot Kate. That’s got to be the most violent case of interrupted nuptials in GH history. She was then shot a third time, by another mobster, Ava Jerome [Maura West], killing Connie and any hope of their second chance to get married. 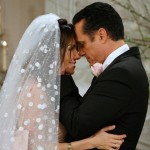 After some offs and ons, Brenda Barrett [Vanessa Marcil] and Sonny Corinthos decided to tie the knot. Sonny was even going to leave the mob and go legit for his soul mate Brenda. They had big plans to head right out of Port Charles after their wedding. Sonny even got past the fact that Brenda wore a wire which could have sent him to jail. First wife Lily Rivera [Lilly Melgar] ratted Brenda out but then Lily was blown up making Sonny an eligible bachelor again. What’s interesting about their incomplete wedding is that Sonny himself was the problem – he decided Brenda would never be safe around him. 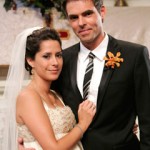 Robin Scorpio [Kelly McCullough] and Patrick Drake [Jason Thompson] had a long and winding road before they made it to the altar. Robin had her HIV drama and the loss of Stone Cates [Michael Sutton] then her romance with Jason Morgan [then Steve Burton] before she met arrogant super-surgeon Patrick. They fell in love but then Robin broke it off because she wanted kids and he wanted to just have fun with her. When they finally work out their differences and a very pregnant Robin waddles down the aisle, her water breaking interrupts the wedding in the sweetest of GH interrupted weddings. 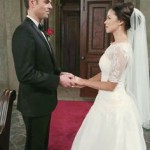 Okay, so the wedding of Sabrina Santiago [Teresa Castillo] and Patrick Drake [Jason Thompson] made it 99.5% of the way through before it was interrupted. Robin Scorpio told Patrick to move on and he eventually did with kind-hearted Sabrina (once she got an attention-getting makeover). Robin was back from the dead and stood outside the wedding watching and waiting and wasn’t going to interrupt and publicly humiliate Patrick or his betrothed. But her daughter Emma Drake [Brooklyn Rae Silzer] spotted her and interrupted her dad’s nuptials right before Lucy Coe [Lynn Herring] said man and wife. 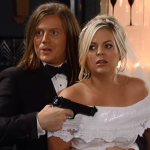 When Maxie Jones [Kirsten Storms] comes back from her eat, pray, love tour with Levi Dunkleman [Zachary Garred], it seems cool but Nathan West [Ryan Paevey didn’t trust the tofu-loving soul surfer from the moment he met him and Levi uttered namaste. Part of it was that Nathan had his own case of the hots for Maxie but she insisted she was getting hitched to Levi no matter what. Nathan interrupts the wedding to reveal Levi’s true identity as con man Peter Harrell who’s after the Aztec necklace and isn’t even an Aussie. Maxie killed her groom and now has Nathan, so happy ending anyway! 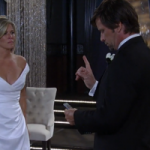 Carly Corinthos [Laura Wright] and Franco’s [Roger Howarth] wedding fiasco has to be the best in General Hospital history. Instead of serving wedding cake, Franco served up an epic helping of karma to cheating love Carly who had been secretly sleeping with ex Sonny Corinthos. Their Halloween wedding was nightmarish as Franco accused Carly of cheating. She denied it but then Franco outed her brutally with a video presentation. Franco showed her bedding Sonny but his coup de grace was revealing to Michael that Sonny killed AJ and Carly kept the secret. You’ve gotta love Franco!

Which was your favorite Port Charles interrupted wedding?