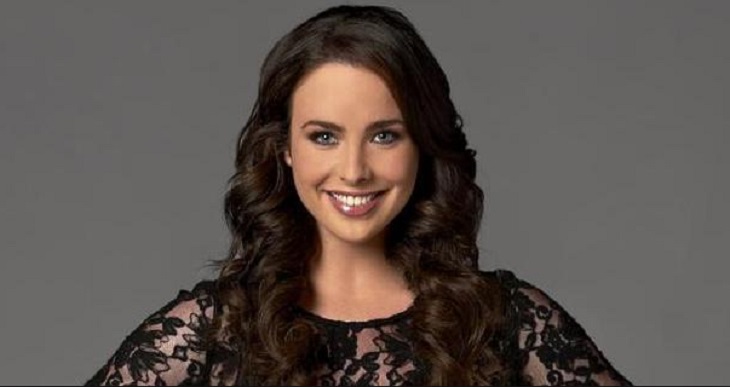 Bon Voyage, Ivy [Ashleigh Brewer]? Social media exploded with the possibility that Ivy could be leaving the show after having a fallout with Wyatt Fuller [Darin Brooks] this week. The spoilers indicated that Ivy will threaten to go back home to Australia.

CBS Soaps in Depth got to the bottom of the scoop to find out if Brewer is planning on leaving the CBS soaps opera. As it turns out, fans have no reason to worry. Ashleigh Brewer is still under contract is not leaving “B&B.”

Whew, that’s a HUGE relief for many fans. As it turns out, Ivy will go to the land down under on the show, and see her mother. The show’s rep assures SID that the trip is short, and within a few days, she will be back at her desk designing the latest jewelry for Forrester Creations.

Ivy returns to Australia because she is feeling under fire and confused after she confronted the fact that she has unresolved feelings with Liam Spencer [Scott Clifton]. Ivy admitted her feelings to Liam, which caused a big issue in his relationship with Steffy Forrester [Jacqueline McInnes Wood].

Ivy is forced to leave town to find herself after she was exposed to Wyatt. She was forced into telling Wyatt that [yet again] she is in love with both, him and his brother, Liam. Just before leaving town, Steffy finds Ivy and confronts her about her intimate feelings about Liam.

Related: Heather Tom Shares She And Her Hubby Hiked 40 Miles With Son On Their Back

A heated argument erupts, and a push turns to shoving—Liam shows up and finds one of them at the bottom of the stairs. Liam cannot believe that an accident happens again, and begins to wonder if it is a good idea to continue with his engagement to Steffy. The spoilers tease that he will ask for his ring back, and end his relationship with Steffy.

Rest assured “B&B” fans, even if Ivy disappears a short while—she will be back. The actress is on contract.