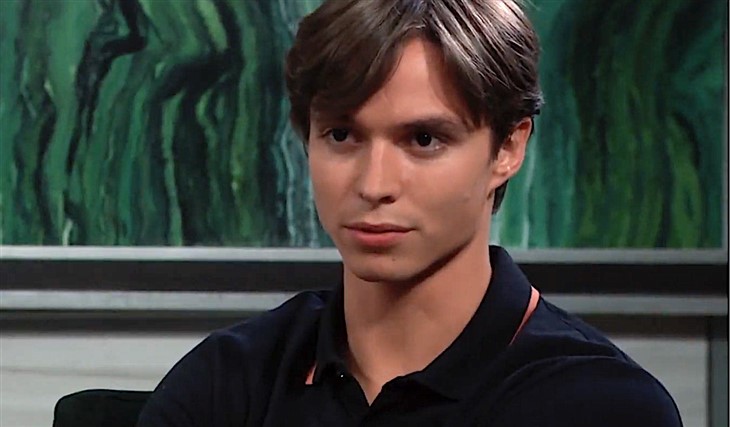 At Kelly’s, a tearful Spencer tells Trina Robinson (Tabyana Ali) he isn’t sure if he’s ready to say goodbye. They may be talking about Britt Westbourne’s (Kelly Thiebaud) memorial service which Maxie Jones (Kirsten Storms) has started setting up. Spencer thought of Britt as a mother, and she almost was his stepmother when he was a little boy.

No one was ready to say goodbye to Britt, and especially not years sooner than they should have had to. Spencer and Trina will also have some questions for Cameron Webber (William Lipton) while at Kelly’s.

At Wyndemere, Victor Cassadine (Charles Shaughnessy) shouts, hold it right there! He’s obviously spotted an intruder – chances are it’s Charlotte Cassadine (Amelie McLain) who is ready to blast Victor. Again her papa is away on a mission, and Charlotte may not be in the loop on this one either. It’s easy for her to think Victor sent Valentin Cassadine (James Patrick Stuart) away when he’s actually on a rescue mission with Anna Devane (Finola Hughes).

At the Metro Court, Laura Collins (Genie Francis) also has a warning but it’s more cautious than Charlotte might be giving Victor. Laura is concerned when she asks Martin Grey (Michael E. Knight) “you’re not actually considering that, are you”? Martin might be anxious about Lucy Coe (Lynn Herring) and thinking of trying to go on his own rescue mission.

But Martin has business at home that is important as well; he’s Esmé Prince’s (Avery Kristen Pohl) lawyer. Laura is somewhat compassionate towards Esmé realizing she’s very pregnant and suffering from amnesia.

At the Quartermaine stables, Olivia Quartermaine (Lisa LoCicero) counsels Drew Cain (Cameron Mathison). He doesn’t look very happy and Olivia’s concerned. She asks him why does she get the impression it has something to do with Carly Spencer (Laura Wright)? Olivia will soon find out it has everything to with Carly and how she sabotaged Drew’s search for Willow Tait’s (Katelyn MacMullen) family. He may mention Carly knew Nina Reeves (Cynthia Watros) was Willow’s birth mother for nearly a year as well.

At Josslyn Jacks’ (Eden McCoy) dorm room, Carly talks to a tearful Josslyn, and tells her she needs to be sure that this is what she really wants. Josslyn is brokenhearted over losing Cameron as even a friend, but it’s her own fault. She might tell Carly everything that happened with Dex Heller (Evan Hofer).

Josslyn was hot for Dex for months and kept stringing Cam along and of course he doesn’t want any more to do with her. He was exactly right in what he accused her.

In the catacombs under Paris, France, Anna and Valentin have found Lucy chained to a wall behind a fence Middle Ages dungeon style. Anna tells a scared and tearful Lucy that she’s going to get her out of there-but Anna and Valentin may wind up chained beside her instead. Valentin’s “trusted friend” Renee Levesque (Maria Tornberg) is nowhere to be seen, and she’d previously made a deal with one of Victor’s henchmen. It will be a desperate rescue indeed if all three of them have to try and escape.