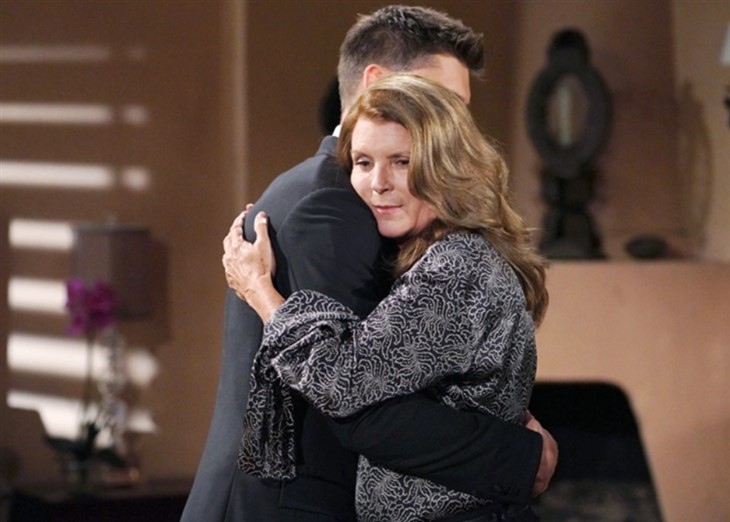 The Bold and the Beautiful (B&B) spoilers tease that Sheila Carter (Kimberlin Brown) will eye a new mind-control victim in the weeks ahead. Sheila wants a relationship with John ‘Finn’ Finnegan (Tanner Novlan) more than anything, so it seems likely that will be her next target.

Sheila has really done a number on Bill Spencer (Don Diamont). She turned the aggressive Dollar Bill into a crying somber mess. But even though he is quiet and seems to be struggling internally, he allows Sheila to speak for him, and he stands with her, kicking Katie Logan (Heather Tom) out of his house.

The Bold And The Beautiful Spoilers– How Is Sheila Carter Controlling Bill Spencer?

This is the question everyone wants to know. How is Sheila controlling Bill? So far, we don’t know the specifics of how she’s managed to control Bill. We all have theories, but the most likely way is hypnosis.

This is the most likely as to how often Sheila repeats the exact phrases. In hypnosis, they program your mind with words, and after hearing the specific term, the victim complies with the demand. In this instance, Bill will repeat that he loves Sheila and is willing to turn his back on his family for their relationship.

At some point, Bill will break free from his trance. However, we won’t see BIll’s freedom for several months. Most creditable spoilers suggest that Bill will dump Sheila during May sweeps. That’s four long months for the Bold and the Beautiful viewers to see Sheila’s relationship with Bill.

After Sheila successfully obtains complete control over Bill, she decides it’s time to aim for Finn. The Bold and the Beautiful spoilers say that Sheila will make a bold move to hypnotize Finn. She thinks if she succeeds, she will finally have the relationship with her son she craves.

Finn will be more complicated than Bill. He has his guard up with her, so getting close enough to him will be a challenge. However, if she can pull it off, she will have everything she’s wanted – a dedicated man, wealthy, and her son.

B&B fans, do you think Sheila can work her magic to control Finn? Keep watching Bold and the Beautiful, airing weekdays on CBS and streaming on Paramount Plus. This site is a leading source for everything linked to The Bold and the Beautiful. Check back regularly for B&B spoilers and news!