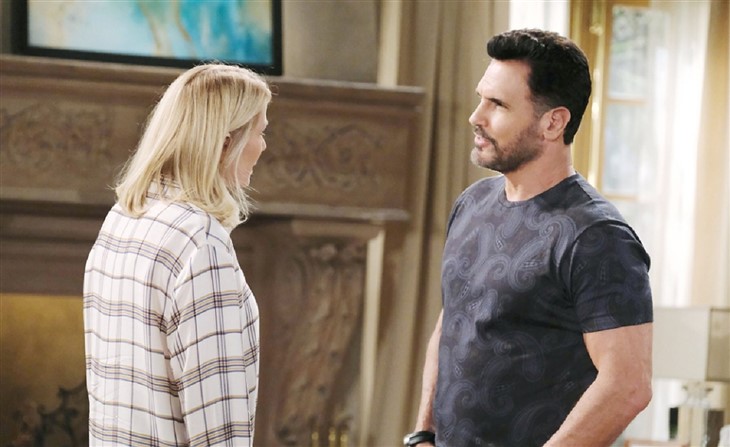 The Bold and the Beautiful (B&B) spoilers tease that Brooke Logan (Katherine Kelly Lang) will try her best to reach Bill and get him to cast Sheila Carter (Kimberlin Brown) out of his life. It will be a hard sell as Sheila has a strong hold on Dollar Bill.

Brooke has had a rough year on B&B. Thomas Forrester (Matthew Atkinson) framed Brooke using a voice-changing app. He claimed that his former stepmom called CPS to remove Douglas Forrester (Henry Joseph Samiri) from his home. After that whole ordeal, Ridge Forrester (Thorsten Kaye) annulled his marriage to Brooke. After he discovered Thomas’s betrayal, Ridge wavered on if he wanted to be with Brooke or Taylor Hayes (Krista Allen).

Brooke and Taylor decided to take their future into their own hands and passed on reuniting with Ridge. That leaves Brooke free to convince Bill to leave Sheila to be with her. In a perfect world, it should work, but adding Sheila’s control of Bill will likely end in failure.

On Friday’s episode (January 20), Liam Spencer (Scott Clifton) advised Brooke to try talking to Bill. He thought that it would be her if anyone could reach his dad. It looked like she was making progress with Bill, but Sheila’s hold was strong, so it could still fail.

Brooke cannot believe that Bill wants a life with Sheila. The last she knew, he hated her. Now, he loves Sheila and wants to spend his life with her. None of this makes any sense to the blonde bombshell.

When Sheila saw Brooke talking to Bill, she couldn’t shake her anxiety. She knows that if anyone can reach Bill to convince him to kick her to the curb, it would be Brooke.

The Bold and the Beautiful spoilers say that Sheila’s hold on Bill is strong enough to resist any reuniting promises Brooke will make. He will likely tell her he’s dedicated to Sheila and wants to be with her. It will leave Brooke speechless and unsure of how to free Bill from Sheila’s grasp.

B&B fans, do you think Bill will turn Brooke down and profess his love for Sheila? Keep watching Bold and the Beautiful, airing weekdays on CBS and streaming on Paramount Plus. This site is a leading source for everything linked to The Bold and the Beautiful. Check back regularly for B&B spoilers and news!