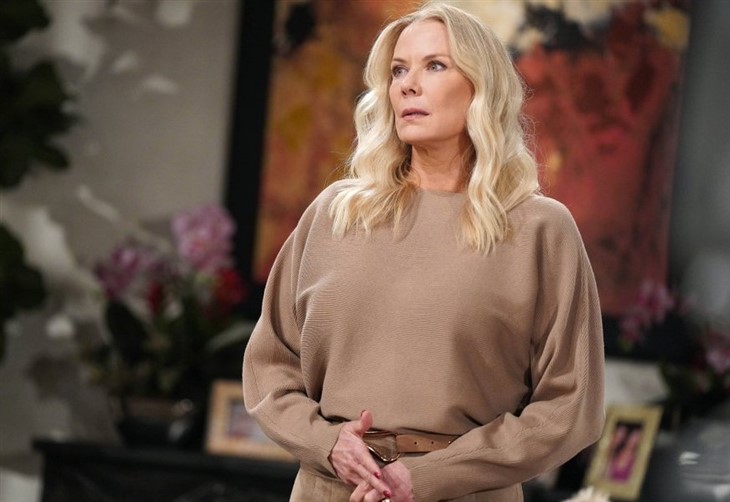 The Bold and the Beautiful (B&B) spoilers document that Brooke Logan (Katherine Kelly Lang) was compelled to go from the cabin to Bill Spencer’s (Don Diamont) mansion. Liam Spencer (Scott Clifton) and Hope Spencer (Annika Noelle) relayed what happened when he and Wyatt Spencer (Darin Brooks) went to see his father and the thing that has invaded his mind, heart, and home.

The thing is what some of Sheila Carter’s (Kimberlin Brown) many enemies think of her as being. They believe she is not human and has no heart. That is exactly what Bill feels people in Los Angeles, California, think about him.

Brooke’s entrance and rousing conversation with Bill were intended to break Sheila’s mind meld. That is a good way to describe the spell Brown’s character, who played a witchy nurse during Halloween, has cast on Diamont’s character.

The Bold And The Beautiful Spoilers – Liam Spencer Feels Forlorn

Liam is very worried about his father. Having had issues with him through the years, including the incredible storyline that involved Kelly Spencer’s (Sophia Paras Mckinlay) paternity, Liam has never seen his dad project this demeanor.

Hope commiserated with her husband in the cabin while Brooke was exasperated. Lang’s character knows Bill as well as anyone, except for her sister, Katie Logan (Heather Tom), and his sons. Justin Barber (Aaron D. Spears) used to know Diamont’s character. But that was before he betrayed Dollar Bill.

So, Liam’s concerns are real because he and his brother witnessed Sheila’s unexplainable influence on Bill.

Brooke told Bill that he was loved. She contrasted what she, Katie, and his sons feel, compared to what Sheila represents.

Bill was affected by Brooke’s words. But his reaction appeared to be a recognition of the past and his new belief that Brooke and Katie never accepted him.

Sheila’s mind game is clear. She has convinced Bill that they represent the same personality type. He can not hurt her because of who she is and vice versa. They are each other’s perceived dark soul mates.

Bill realized that he hurt the people who cared for him. That clarity is the reason why he believes pairing with Sheila is what is best for him now.

But Bill also believes being with Sheila is best for his loved ones. He thinks he will neutralize Brown’s character by pairing with her because she will not feel compelled to lash out.

Teasers indicate that Bill will reject Brooke’s pitch, as he has the other pleas made to him in recent days. Bill and Sheila are the new couple that appears to be in ascendancy on B&B.

Y&R Spoilers: Kyle Growing Sick Of His Parents, Sides With His Wife