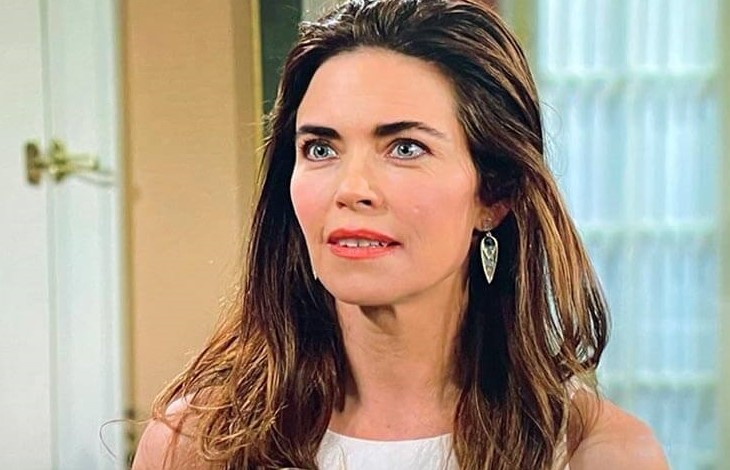 The Young and the Restless spoilers reveal that at the end of Tuesday’s episode, Victoria Newman (Amelia Heinle) sends a mysterious text message. The recipient wasn’t shown, and all Victoria said is that everything’s working perfectly. So, who is the mysterious person that is helping Victoria destroy Ashland Locke (Robert Newman)?

The Young And The Restless Spoilers – Conning Ashland Locke

Y&R spoilers reveal that Victoria blindsided everyone by getting back together with Ashland. Then, Victoria announced that she was leaving Genoa City to start a new life with the “Locke-ness Monster.” From all appearances, it seemed as if Victoria had really given up everything for love.

However, it is becoming apparent that Victoria is getting revenge and redemption. Victoria knows it’s her fault that Victor Newman (Eric Braeden) lost $500 million trying to get rid of Ashland. Victoria also knows that she’s not going to be able to move on until she hurts Ashland both in the heart as well as the pocketbook.

Victoria also wants to earn redemption in her father’s eyes. Victoria might also be trying to prove that she can clean up her own messes.

At the end of the Tuesday, June 29 episode, Victoria distracted Ashland by urging him to find them an entire office building. While Ashland was on the phone, Victoria snuck into her bag and sent a text message. It isn’t known who the text message was to, but fans did get to see what was sent. Victoria wrote that everything’s working perfectly, so it’s clear she has an accomplice.

The Young And The Restless Spoilers – Victor Newman’s Investor Block

The Young and the Restless spoilers reveal that while Victoria is scamming Ashland in Manhattan, Victor and Nick have a chat in Genoa City. Nick is feeling guilty about telling Victor about his conversation with Victoria. Nick fears that it will get back to Victoria and she will feel betrayed. Nick doesn’t want to lose his sister all over again.

Victor is just using the con artist’s own lie against him. Victor is likely the person that Victoria was texting. It would be just like him to be part of this secret scheme.

However, if Ashland ends up dead, could Victor’s statement to investors come back to haunt him? It is teased that Ashland could end up murdered and there would be multiple suspects. It’s also possible that Ashland fakes his death to implicate Victor in the crime. After all, Ashland has faked his death before.