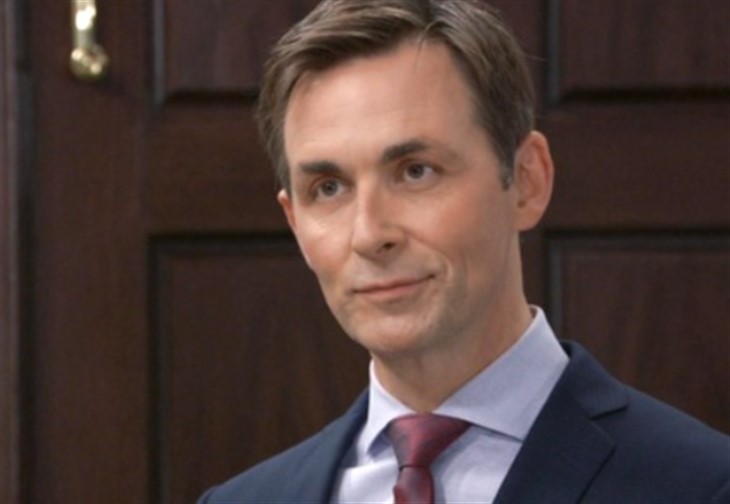 General Hospital spoilers and updates tease that Valentin Cassadine (James Patrick Stuart) will be blindsided when he asks Nina Reeves’ (Cynthia Watros) help with something. She’ll turn him down in an upcoming episode of GH!

Valentin thought he could always count on Nina, as a matter of fact she said he could the last time they had a conversation, and he wonders what has changed. That time the subject of conversation had been Charlotte Cassadine (Amelie McClain) and they had talked about her love of horses. Valentin learned that Charlotte had been in communication with Nina and they still kept up with each other online since Charlotte went to boarding school.

However, this time Nina tells Valentin she can’t help him; but this has nothing to do with Charlotte. It has everything to do with Sasha Gilmore Corbin (Sofia Mattsson) and that she won’t be Valentin’s spy!

General Hospital viewers will remember that Sasha came to Port Charles as a fake “long lost daughter” hired by Valentin to try to heal Nina’s broken heart. She had found a half heart pendant with a note that the other half would heal a broken heart after her mother Madeline Reeves (Donna Mills) had died. This was in the box of Madeline’s effects sent to Nina from the prison where Madeline had been incarcerated, and it took a few years before the truth came out.

Eventually, Nina divorced Valentin and she and Sasha, who she had become very close to had a falling out; but since then then Nina and Sasha have put their past behind. When Valentin wants Nina to act like a spy to find out if Sasha’s taking pills again, Nina refuses – although she will keep an eye on her for herself!

General Hospital Spoilers – Everyone At Deception Is Covering Up

Valentin knows there’s something wrong, and he can’t afford for Deception’s top model to mess up – it seems like everyone in the company is covering up, even Lucy Coe (Lynn Herring)! That was a serious problem that went on at the Home and Heart Channel with Sasha’s meltdown and Valentin wants to know why-it could lose them their contract! He gets her having a hard time recovering from losing her baby but this has been over six months now and Deception needs her stable!

It certainly isn’t that Nina doesn’t care and isn’t worried about Sasha. When Valentin tells Nina what he suspects she’ll keep an extra close eye on her but she won’t report back to him!

Unbeknownst to Valentin, Sasha has many “mothers” looking out for her, and trying to get her some help. Valentin himself would likely be sympathetic if he knew what was going on but Nina, Gladys Corbin (Bonnie Burroughs) and Carly Corinthos (Laura Wright) want to keep Sasha’s problems private. Scandals aren’t needed so discretion must be used; but those in the know who are close to Sasha know she can’t do this herself and she needs help! Nina will try gently to get her to talk and open up to her but she won’t be a spy or a narc!