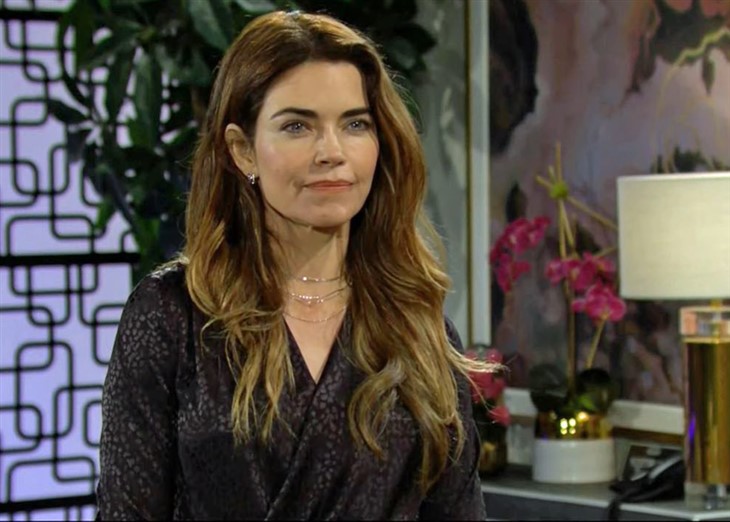 The Young and the Restless spoilers document that Victoria Newman (Amelia Heinle) is fronting that she wants Billy Abbott’s (Jason Thompson) plan to succeed so that she can obtain Newman Media at a depressed price. That can not be her entire story. Right?

Billy is off on yet another hair-brained scheme. Having money and Lily Winters (Christel Khalil), still incredibly by his side, enables Billy to pursue wild adventures. And so, he is.

But what is Victoria’s angle beyond the re-acquisition of the media company she purposely sold off to Billy in the recent past when first assuming control at Newman Enterprises?

The Young And The Restless Spoilers – Is Newman Media All There Is?

Time for some unvarnished honesty. Some elements of some soap storylines are a bit silly.

But viewers accept the rub as part of what is termed the suspension of disbelief. That means viewers accept Newman Media is the only media entity in the entire world that fits Newman-Locke’s needs. Okay.

Victoria does not need to specifically buy Newman Media. She has to know that her father may not choose to sell it back to her at any price. Plus, many other similar companies could fill the hole she created in Newman-Locke’s portfolio of assets.

Victoria often ranted and raved at Billy for good reason. He behaved so recklessly during their marriages. On one occasion, when Billy Miller (Billy) was still part of the cast, his actions led to Victoria’s kidnapping.

Thompson, like Miller before him, is a strong actor. He has truly made today’s Billy his own. At times vulnerable and sympathetic. At others, Billy is an unlikable lout.

Heinle’s character has Billy in her blood. While she loves Ashland Locke (Richard Burgi), and he is not a placeholder, there is no doubt that Victoria is fond of Billy and will be forever. His connection to this ploy is the reason why Victoria is on-board.

The Young And The Restless Spoilers – How Does This Deal Go Down?

Far too many people know that Billy is playing a game. Traci Abbott (Beth Maitland) seems the most likely person to end Billy’s scheme because she will not allow her brother to put himself or others in harm’s way.

Billy better be careful, or he could not only see his plan disintegrate at any moment but, more importantly, he could break Lily’s trust. She, not Victoria, is committed to him. Billy needs to realize that, follow Lily’s advice, and stop playing revenge games.