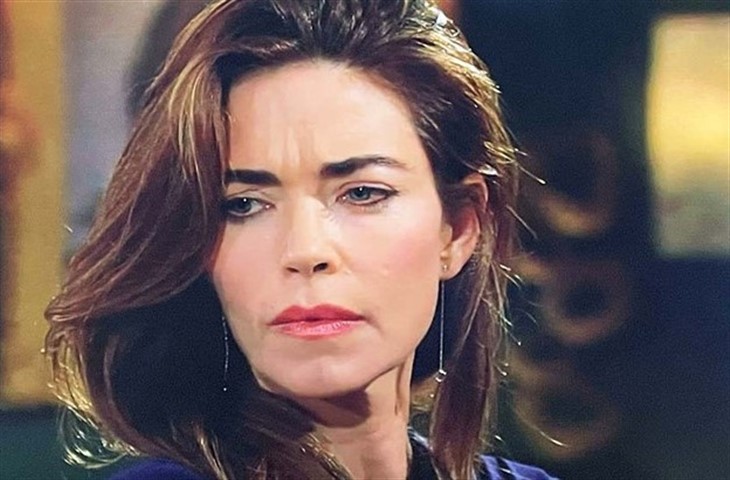 The Young and the Restless spoilers reveal that during the week of March 14, Victor Newman (Eric Braeden) gets indisputable proof. Victoria Newman-Locke (Amelia Heinle) sees receipts that prove Ashland Locke (Robert Newman) never had cancer. When Victoria’s heart is broken, Billy Abbott’s (Jason Thompson) comfort could turn into something more.

The Young And The Restless Spoilers – Victoria Newman-Locke’s Uncertainty

Y&R spoilers reveal that Victor issued an ultimatum to Ashland, which was rejected. Ashland said that he wasn’t going anywhere. Then, Ashland took action and manipulated Victoria into believing it was them versus the world. Right now, Victoria seems blinded to Ashland’s lies.

However, fans who paid close attention during a recent episode know that Victoria is beginning to wonder about Ashland. It all happened after Victoria lashed out at Nikki Newman (Melody Thomas Scott). When Nikki stormed off, Victoria left a message for Michael Baldwin (Christian LeBlanc). So, it’s clear that Victoria is wondering if maybe she’s been wrong about Ashland this whole time.

During the week of March 14, Victor will get receipts that prove Ashland has been lying about cancer this entire time. Victor shows Victoria the evidence that shows he’s telling the truth about Ashland.

However, the receipts might not come from Michael, or perhaps the evidence was sent before Ashland’s Peruvian contacts took drastic action. That same week, Lauren Fenmore Baldwin (Tracey E. Bregman) learns disturbing news about Michael.

The Young and the Restless spoilers reveal that Billy tried to warn Victoria about Ashland multiple times. So, when Victoria is heartbroken, Billy might be there to comfort his ex-wife.

At the same time, Billy is going through his own relationship problems. Billy is having a hard time dealing with Lily Winters (Christel Khalil) being in charge. Billy is proud of his girlfriend, but it’s clear that he’s also struggling with it.

The Young And The Restless Spoilers – Lily Winters Betrayed?

It appears that Billy and Lily are going to struggle with the dynamics of their relationship, both personally and professionally. When Billy comforts Victoria after Ashland is finally exposed, it could turn into passion.

Of course, Billy doesn’t intend on betraying Lily. However, characters never do in soaps. If Billy and Victoria engage in passion, what does that mean for their relationship? Will Lily find out or could this be the start of another love triangle?

What do you think is going to happen when Victoria is finally forced to face the truth about Ashland? Will she be comforted by Billy and could it lead to something more? Share your thoughts and remember to keep watching the CBS soap to see what happens next.