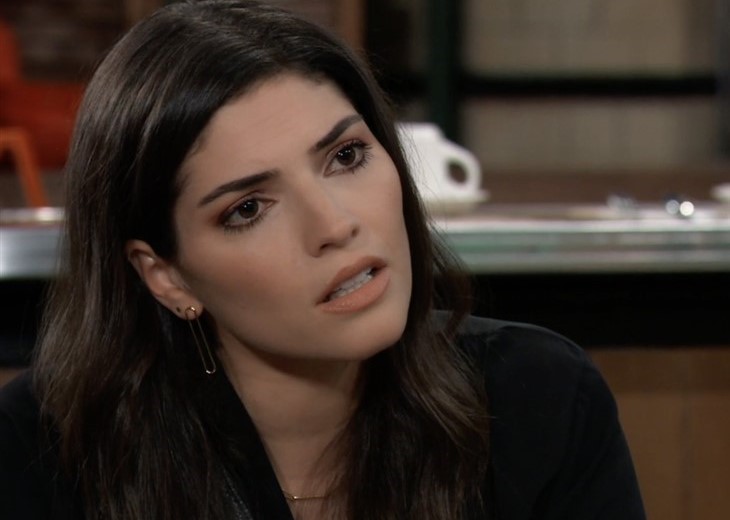 Brook Lynn Quartermaine (Amanda Setton) has lifechanging idea to get Harrison Chase (Josh Swickard) out of trouble and back to work at the PCPD. Chase had recently told his father, Gregory Chase (Gregory Harrison) and brother, Hamilton Finn (Michael Easton) about his extended suspension. He has to be reviewed by a civilian review board which seems to be all about what civilians think, not from a cop’s point of view.

Brook Lynn approaches him at the Metro Court Pool, where his father and brother just cleared out and he took off his shirt to go for a swim. Brook Lynn tells him this is the day she changes his life –perhaps she thinks she can get on the review board and sway them?

GH Spoilers – You Have No Idea How Much

Elsewhere at the pool, Cameron Webber (William Lipton) is trying to put his and Spencer Cassadine’s (Nicholas Chavez) undercover plan into play which is totally based on a lie! The plan is to get some DNA from both Josslyn Jacks (Eden McCoy) and her mother Carly Corinthos (Laura Wright) to get a comparison. Then Spencer would use it to fake a DNA test showing Esmé Prince (Avery Kristen Pohl) and a fictitious woman living in Portugal as a match. Spencer is up close to Josslyn and tells her she has no idea how much he likes doing that! “That” may be rubbing suntan lotion on Josslyn, but the lotion would obliterate any DNA he might get from her!

General Hospital Spoilers –What Are You Going to Do With Me

Near the pool, Esmé has detained Spencer, who was supposed to get some DNA of Carly’s, and he was going to use the faked test to bribe Esmé to confess! She snuggles up to him in a seductive way and asks him, now what is he going to do with her! That is an apt question indeed, because he needs to get away from her to complete the plan and get over to Carly!

For this plan to work, Spencer has to distract Carly and get DNA from her while Cameron gets some from Josslyn! It looks like the plan is going to backfire and they won’t be able to get any DNA from either woman!

Carly’s life has changed for the worse, and she’s evasive with Sonny Corinthos, (Maurice Benard) who has approached her and Olivia Quartermaine, (Lisa Lo Cicero). Olivia had just offered to buy Carly’s half of The Metro Court for Carly to buy it back from her in installments but Carly had refused. Carly had cited how Ned Quartermaine (Wally Kurth) had not been forthcoming with Drew Cain (Cameron Mathison) and Michael Corinthos (Chad Duell) and doesn’t trust Ned because of it. Olivia had suggested asking Sonny’s help since she’d have to get the money from Ned, but Carly won’t have anything to do with that and brushes him off!

At the offices of Crimson Magazine, Drew is talking to Nina Reeves (Cynthia Watros) who is suspicious; she asks him why does she feel like there’s another angle? Drew plans to sell Crimson but wants to give her first dibs, and it’s likely he took such a hit with Aurora Media stock plummeting he may be forced to sell! Nina will likely have to consider that purchase since it’s in Carly’s building, not knowing half of it isn’t Carly’s anymore!

But if Nina doesn’t buy the magazine she’s put her heart and soul into for the last few years, who would be her new boss? That would be an important issue to consider in making her life changing decision!

Sonny has gone into the Metro Court and witnesses an interaction between Damian Spinelli (Bradford Anderson) and Cody Bell (Josh Kelly). Obviously, Sonny can tell Spinelli is nervous around the sometimes cowboy, sometimes parachutist and asks him what kind of trouble is he in with Cody? Sonny may or may not know that Cody is a childhood friend of Dante Falconeri’s (Dominic Zamprogna) since he didn’t even know Dante existed until he was an adult! Spinelli will probably lie and brush his case of nerves off as too much caffeine, but Sonny will see right through it, and he suspects Cody is trouble!

Meanwhile, Cody’s telling someone they’re keeping their secret, and that could be Spinelli after Sonny gets done with him! Cody’s and Spinelli’s secret has something to do with Society Setups and Zelda Telesco (Kristin Carey) and that Spinelli told Zelda that Cody was going to be trouble! But it looks more like Spinelli’s the one in trouble being in over his head with Zelda, and perhaps Cody’s in over his head too! Keeping secrets and telling lies is not what either is apparently comfortable with but they are both being forced into it!