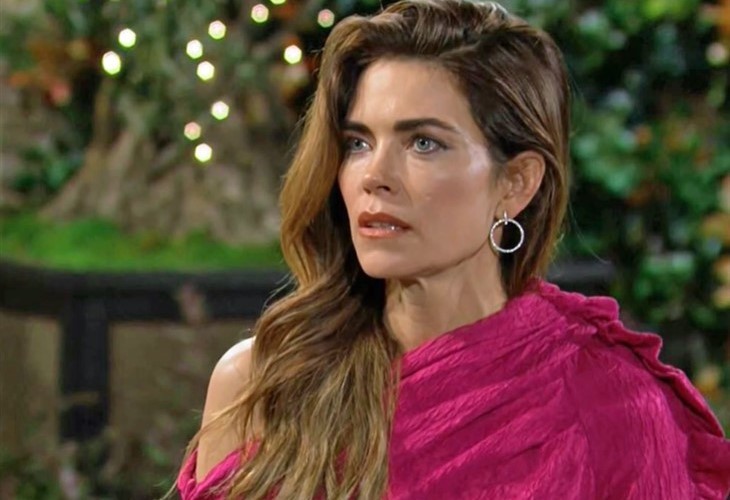 Viewers of The Young and The Restless will remember that Victoria was very upset when he told her that he bailed out of his plot to bring down Adam Newman (Mark Grossman) and Newman Media! In a recent episode, Billy, after catching Sally Spectra (Courtney Hope) playing undercover spy, brought her into Adam’s office and gloated as to how he’d successfully fooled them and could have sued them for slander and spying. It seems that satisfied Billy’s urge to get back at Adam and the Newmans and he had no more need to try to take them down, and tells Victoria he’s backed out of the plot. When he tells Victoria he’s backed out in an upcoming episode of The Young and The Restless, she is not happy, in fact she’s livid – she wants to get her hands on Newman Media!

Viewers of The Young and The Restless will recall that Billy’s plot was part of Victoria’s plan, and she had agreed to help him carry it out, and here he has bailed out of the whole thing! Longtime viewers of The Young and The Restless will remember that this certainly wasn’t the first time, and not the first situation, in which Billy has let Victoria down, and the reason Victor Newman (Eric Braeden) doesn’t like him! Victor has been happy that “Billy Boy” has been out of the picture in Victoria’s life, other than co-parenting their children and he hasn’t even trusted that – and he confronts Victoria about still protecting Billy. Victoria vehemently denies that she is protecting her ex-husband in any way whatsoever, and she tells Victor she proved a long time ago that she cannot be manipulated by him, as may have happened early on in their relationship.

Viewers of The Young and The Restless will have recognized that Victoria is a lot like her father – especially when it comes to power plays and acquisitions of other companies, sometimes competitors but not always! In that way, Victoria is also a perfect match for her new husband, “The Locke Ness Monster” Ashland Locke (Richard Burgi) which is probably why Victor likes him in spite of forcing him to sign a contract in the midst of a heart attack! Viewers of The Young and The Restless will remember that Victoria has also wanted to take back ChancComm-which used to be the media wing of Newman Enterprises and she reveals her end game to Victor. Her father surprises and somewhat shocks her when he’s pleased with her plan, which is not only to take over ChancComm but also his and Adam’s company, Newman Media, and consolidate both of them under Newman-Locke! Victoria, however, knows her father very well and suspects there’s a hidden agenda behind his seeming support of her venture!