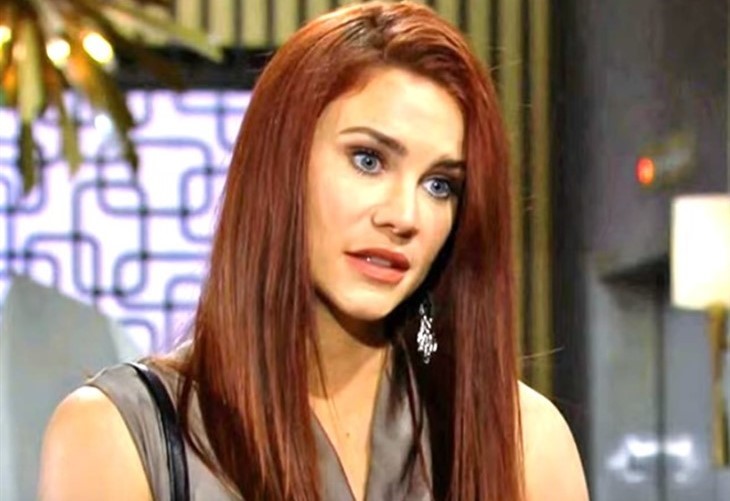 The Young and the Restless (Y&R) spoilers for Tuesday, December 21, 2021, reveal Sally Spectra in the hot seat as Victor Newman gives the young fashion designer the third degree.

Despite Sally (Courtney Hope) living in Genoa City for well over a year, she has managed to stay under The Great Victor Newman’s (Eric Braeden) radar for most of this time. She was originally involved with the Abbotts, with Summer Newman (Hunter King) thinking she was after Kyle Abbott (Michael Mealor), when Sally was really after Summer’s job — and Jack Abbott (Peter Bergman).

When Jack found Sally out for the lying manipulator she really is, he dumped her like a hot potato and she landed on her feet working for Adam Newman (Mark Grossman) at Newman Media — in the dress design division, of course, as the Newmans seem to now have a fashion house. Even after designing Victoria’s (Amelia Heinle) wedding dress, Victor still didn’t pay her much mind, but now that Adam is paying her a lot of mind, Victor needs to know who this woman truly is.

Can Sally hold her own when Victor questions her on Tuesday about what her true motives are?He can be an intimidating man, but Sally doesn’t often let men intimidate her. Also, what will Victor think of this young woman once he sizes her up?

Despite the fact that Adam is clearly attracted to Sally, for Connor’s (Judah Mackey) sake, he and Chelsea Lawson (Melissa Claire Egan) spend Christmas together at the penthouse. Connor and Chelsea may enjoy the time feeling like a family, but does Adam? He made it clear to Chelsea that he doesn’t feel they should get back together, but just remain friends for Connor’s sake. However, that doesn’t seem to be what Chelsea wants and Chelsea usually goes after whatever her heart desires.

The Young And The Restless Spoilers – Is Billy Abbott Falldown Drunk?

Billy Abbott (Jason Thompson) is determined to land back on top while also bringing down Victor and Adam. That’s not an easy feat for anyone, especially Billy. But he has a plan and when he passes out drunk in front of Adam and Victor at Society, is he putting that plan in action? Stay tuned to The Young and the Restless weekdays to see how these stories play out.

Days Of Our Lives Spoilers: Chanel And Johnny Have Massive News To Share

B&B Spoilers: The Brooke-Taylor Confrontation You’ve Been Waiting For