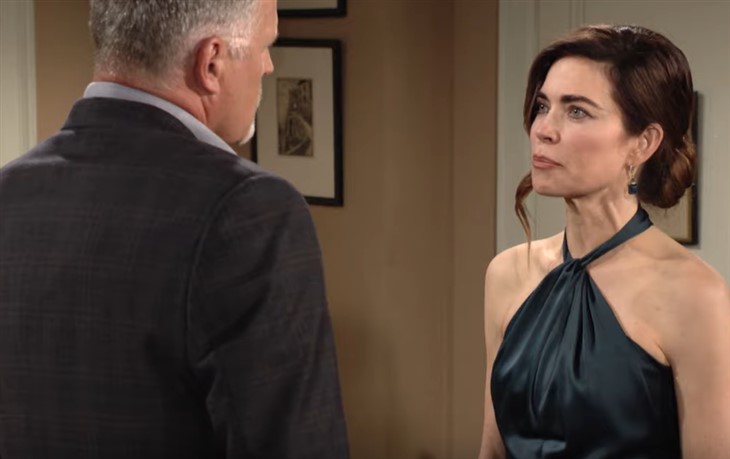 The Young and the Restless spoilers reveal that Victoria Newman (Amelia Heinle) conned Ashland Locke (Robert Newman). After admitting she duped Ashland out of $250 million, Victoria returns to Genoa City. However, Victoria must know that Ashland will come after her. It is suggested that Ashland plans on having Victoria kidnapped but it could all go wrong.

The Young And The Restless Spoilers – Victoria Newman’s Scheme

Y&R spoilers reveal that Victoria was heartbroken and humiliated by Ashland’s manipulation. Even though Victoria claimed to be done with Ashland, she ended up reuniting with the villain. Then, Ashland and Victoria went to New York with plans to start a new company to rival Newman Media.

Victoria ended up manipulating Ashland just as he manipulated her, though. Not only did Ashland get duped in matters of the heart but Victoria got back the money that Victor Newman (Eric Braeden) paid to get rid of the “Locke-ness Monster.”

Victoria was lucky to walk out of that Manhattan hotel room after exposing her scheme to Ashland. Even though Ashland let Victoria return to Genoa City, she must realize that he’s going to want revenge.

In the weekly preview for the week of July 4, Ashland tells his henchman what to do next. Ashland says that the target will be more manageable than the last one. Ashland instructs his minion to go after Victoria. It is suggested that Ashland is going to have Victoria kidnapped.

The Young And The Restless Spoilers – Kidnapping Scheme Goes Wrong?

The Young and the Restless spoilers reveal that Victoria returns to Genoa City and takes her place back at the helm of Newman Enterprises. However, Victoria won’t tell Nikki Newman (Melody Thomas Scott), Nick Newman (Joshua Morrow), or Billy Abbott (Jason Thompson) what happened in New York.

This might be a mistake on Victoria’s part. Of course, there is always the possibility that Victoria knows Ashland is going to come after her. If Victoria can predict Ashland’s next move, she might be able to get rid of Ashland by sending him to prison.

In soaps, plans never seem to go right, though. Victoria could find herself in a sticky situation when the attempted abduction takes place. However, don’t expect Victoria to just give up. Victoria is a lot of things – both good and bad – and that includes fighting until the bitter end.

During the week of July 11, it is teased that Victor celebrates Ashland’s defeat. Is this defeat finding out that Victoria recouped all those millions? Or could defeat mean that Ashland has been taken care of permanently? Perhaps there is a vicious fight during the kidnapping which leads to Victoria killing Ashland in self-defense. We will have to keep watching the CBS soap to find out!