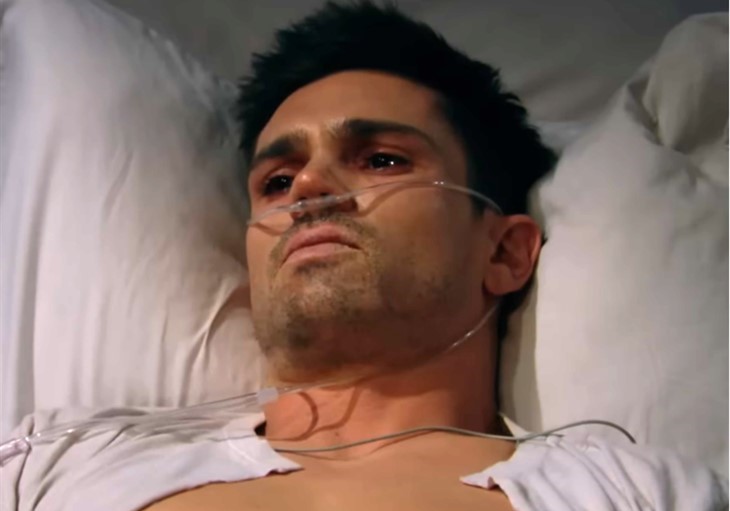 The Bold and The Beautiful spoilers and rumors tease that John “Finn” Finnegan (Tanner Novlan) will trick Sheila Carter (Kimberlin Brown) in an escape attempt in a future BOLD episode!

Previous BOLD episodes revealed that Finn started to barely come to as Sheila and Li hovered over him but quickly went back to sleep. He did manage to mutter something which caused Sheila and Li to rejoice that he didn’t suffer brain damage and his coma wouldn’t be permanent. However, Li appeared to try to escape and call the police – or at least that is what Sheila thought – and Finn was left alone as she chased after Li.

Mike happened to be outside Li’s house standing in the rain after likely either bringing or following Sheila after he helped her escape during transport to the prison from the jail. Sheila borrowed his car to chase Li, and in the dark and rainy night, Li took a long drive off a short pier and her car exploded and went underwater.

Sheila returns to Li’s house and requests Mike’s help and asks him to step inside, and he is shocked to see Finn alive hooked up to machines! Sheila explains what happened and that she needed his car to round up a panicking Li but lost track of her in the dark and rainy night. This is why she needs his help – she cannot take care of her son by herself, she needs him to help her make sure he continues to survive!

Then Finn awakens fully – but flatlines, and against Mike’s advice Sheila grabs a nearby defibrillator and shocks his heart, restoring sinus rhythm and brings him back to life! Finn again awakens and mumbles questions about Li and Steffy Forrester Finnegan (Jacqueline Macinnes Wood).

When Finn is lucid enough to ask about Li, she begins to cry and says she’s so sorry, but Li is not coming back! This is when she might trust Mike enough to tell him the whole truth but she won’t do it in front of Finn. Finn fears the worst when Sheila breaks down in tears and keeps apologizing, suspecting she killed his adoptive mother even though this too may be an accident.

As Sheila kept chasing Li down that pier or possibly a bridge that was out, there was a loud thud and the gas tank exploded, indicating Sheila did not bump her. That is because the gas tank is on the bottom of the vehicle and she likely drove over something.

While Sheila and Mike Guthrie (Ken Hanes) aren’t looking, he’ll shoot a quick email to his father Jack Finnegan (Ted King) from Li Finnegan’s (Naomi Matsuda) computer. This will be while Sheila explains the truth about what happened to Li to Mike privately, and that Li likely did not survive the plunge into the bay.

In the meantime, Jack will have contacted Taylor Hayes (Krista Allen) and Thomas Forrester (Matthew Atkinson) looking for information about Li and Finn. Finn will also at some point try to call Steffy and Taylor and possibly Ridge Forrester (Thorsten Kaye). At some point he, Taylor, Ridge and an unknown woman, possibly law enforcement will meet in Monte Carlo looking for Steffy and the kids so Finn will escape!