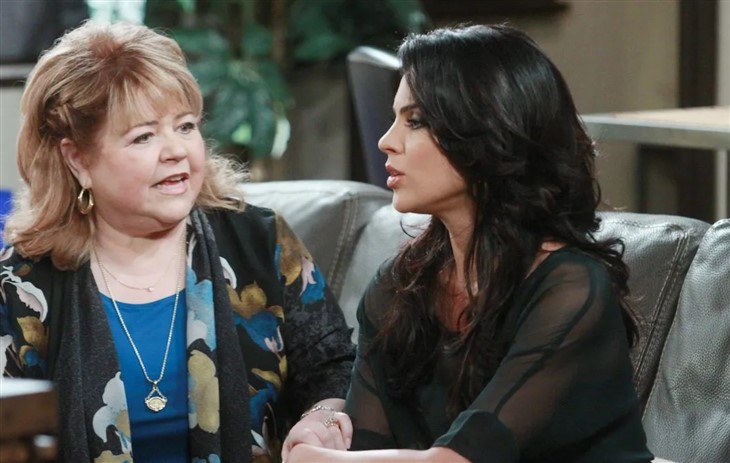 Days of Our Lives spoilers reveal that Rafe Hernandez (Galen Gering) makes an arrest in Abigail DiMera’s (Marci Miller) murder case. It’s looking like that arrest could be Clyde Weston (James Read). Nancy Miller (Patrika Darbo) will probably give Clyde the benefit of the doubt. However, this causes major issues between Nancy and Chloe Lane (Nadia Bjorlin).

DOOL spoilers reveal that during the week of July 4, Rafe tells Chad DiMera (Billy Flynn) that he’s made an arrest. Chad will lunge at the suspect but this individual won’t be the person who killed Abigail.

Based on the police questioning Nancy along with Clyde swearing he’s innocent to Ben Weston (Robert Scott Wilson), it’s clear who Rafe arrests. Of course, Chad will have to be held back when he tries to physically go after the suspect.

When Clyde and Nancy first met, the career criminal admitted he had been in prison. Clyde admitted he made a lot of mistakes. However, Clyde assured Nancy that he was looking for a fresh start. Clyde said that this fresh start was due to being a grandfather and wanting to be part of that child’s life.

Nancy believed Clyde and despite everyone’s warnings, she trusts that he was honest. So, when Nancy finds out that her new jewelry actually was stolen the night of Abigail’s murder, she will be furious.

Days of Our Lives spoilers reveal that knowing Clyde, he will have a perfectly logical explanation. Despite Clyde getting the jewelry off of Leo Stark (Greg Rikaart), he will probably claim not having any idea it was stolen. Nany will want to give Clyde the benefit of the doubt, especially after Rafe is forced to release him.

Of course, Nancy will have another fight with Leo and the jewelry will be mentioned. It is teased that at this time, Leo makes a startling realization about Clyde. So, that suggests Leo will worry that Clyde exposed him for the theft. Leo will start panicking that he could be charged with Abigail’s murder.

This might be what prompts Leo to visit Gwen Rizczech (Emily O’Brien) in jail again. Leo will need to do damage control and might need Gwen’s help with that.

A photo of Nancy and Chloe was published in Soap Opera Digest. It shows Nancy and Chloe getting into an argument. The caption states that the mother and daughter debate about Clyde. Chloe will be positive that Clyde and Leo are in cahoots, which will only make her more paranoid about Nancy’s relationship.

However, Nancy isn’t a child and could resent Chloe poking her nose where it doesn’t belong. In the end, will Chloe turn out to be right? Is Nancy making a terrible mistake by trusting and defending Clyde?