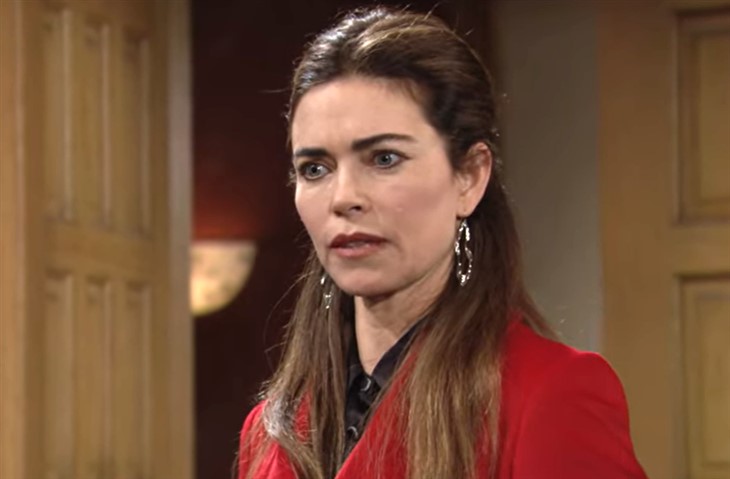 The Young and the Restless (Y&R) spoilers for Monday, January 31, 2022, reveal Victoria thinking she’s won another battle when she still has no idea what she’s gotten herself into.

The Young And The Restless Spoilers – Can Victor Newman Save His Dumb Daughter?

Victor Newman (Eric Braeden) is growing more and more suspicious of Ashland Locke (Richard Burgi) while Victoria Newman Locke (Amelia Heinle) falls deeper in love thinking she is one part of the greatest power couple that ever lived. Since her husband is clearly pulling the wool over her eyes and has been for ages, Victoria is incorrect about her power couple status.

However, on Monday she does believe she has the upper hand in her quest to take over Newman Media and stick it to Adam Newman (Mark Grossman) for no good reason except that she thinks she can. So, Victor has to step in.

If Adam wants to beat Victoria at her own game, then he needs to be focused and he can’t be focused if he has problems in his personal life. Victor warns his son there is too much trouble with both women who seem to want him, meaning Sally Spectra (Courtney Hope) and Chelsea Lawson (Melissa Claire Egan). Will Adam heed his father’s warning and stay completely enmeshed in the business? Victor was kind enough to inform him that Victoria is coming for him, so he better be ready when she does.

Surprise, surprise, the only therapist in town is on the job as the coffee house owner who recently earned a degree and does not actually have a therapy practice, counsels Abby (Melissa Ordway). That’s right, Sharon Rosales (Sharon Case) tries to help Abby Newman work through the anguish she feels over giving up her son one night a week to Devon Hamilton (Bryton James) the man she called over every time he sniffled when he was first born.

Will Sharon make Abby feel any better about her decision? Will she also offer her a suggestion on what they can do about Chance Chancellor’s (Conner Floyd) PTSD? Perhaps that will help with Abby’s entire family situation? Stay tuned to The Young and the Restless weekdays to see how these stories play out.