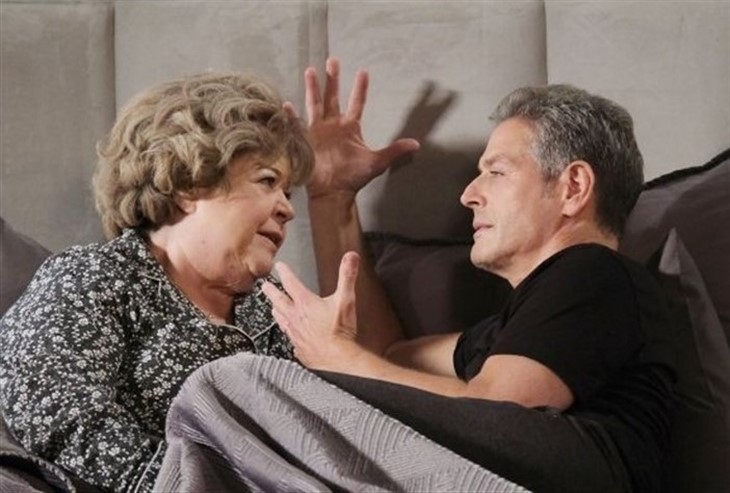 Days of Our Lives (DOOL) spoilers for Monday, January 31, 2022, reveal Craig Wesley having to tell Nancy Wesley something she never thought she’d hear from her husband.

At one time, Craig (Kevin Spirtas) and Nancy (Patrika Darbo) made up one of the most solid and in love couples in Salem. They had been together since they were very young with Nancy even becoming pregnant and never telling Craig she gave their daughter up for adoption. Years later, they learned that daughter was Chloe (Nadia Bjorlin), and eventually had another little girl named Joy who is all grown now too. (Maybe she can move to Salem!)

Nancy couldn’t believe it when she thought Craig was cheating on her with another woman, but he assured her that he wasn’t and Nancy believed him because you trust the man you have been married to for decades and raised children with. So, Nancy is completely unprepared when Craig drops the bomb that he is having an affair — but not with another woman, with a man.

This is something Nancy does not see coming and you can expect her reaction to be absolutely epic. She is hurt. She is shocked. But most of all, she is angry.

Amazingly, Chad DiMera (Billy Flynn) has noticed that Abigail DiMera (Marci Miller) is missing. Sometimes it takes a while for people to realize these things in Salem, but Chad seems to be on the ball here. He goes to Kate Roberts (Lauren Koslow) and tells her his problem since Kate is the person he turns to the most. Kate and Chad decide to team up to find her.

Meanwhile, Abigail is definitely not living in squalor during her hostage situation. She seems to have a great house to live in and even some friends to keep her company — namely Kristen DiMera (Stacy Haiduk) and the actual Sarah Horton (Linsey Godfrey). Except Sarah also wants to escape their nice living conditions, so will they manage to do so together or does Kristen have other things in mind for her two guests? Stay tuned to Days of Our Lives weekdays to see how these stories play out.