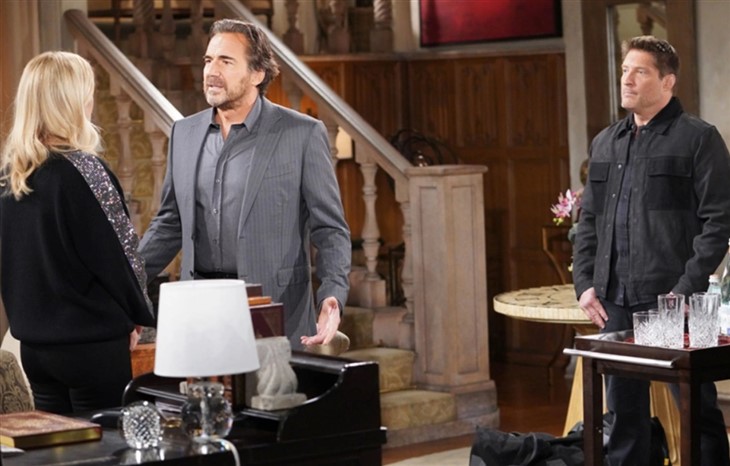 The Bold and the Beautiful (B&B) spoilers for Monday, January 31, 2022, reveal Ridge having a word or two with Deacon — without really knowing what is really going on.

Yes, Ridge Forrester (Thorsten Kaye) did hear Douglas Forrester (Henry Joseph Samiri) say that he saw Grandma kissing Santa and that he was indeed talking about Grandma Brooke (Katherine Kelly Lang). That made no sense to Ridge and he just assumed Douglas was confused so he went about his merry way in life as Thomas Forrester (Matthew Atkinson) returned the boy to the little cabin he lives in most of the time with Hope (Annika Noelle) and Liam Spencer (Scott Clifton).

On Monday, Ridge runs into Deacon Sharpe (Sean Kanan) and since Deacon is there, Ridge decides to just yell at him and rehash the same old, same old about how he needs to stay away from Hope and Brooke Logan Forrester. After all, it’s not like the man is Hope’s father. Oh, that’s right, he is.

Ridge better watch what he says because Deacon can elaborate on what Douglas has been trying to tell everyone about Grandma and Santa. If Ridge makes Deacon too angry he just may do that. Or perhaps Deacon will try to keep Brooke’s confidence and impress her and not say a word.

Thomas once again has Douglas away from the crazy people he somehow lives with and now has time for his son all by himself. (We know Thomas once had issues, but he also had brain surgery to fix those issues. What’s Hope, Liam, and Brooke’s excuse for gaslighting this child?)

And now that Douglas is alone with his dad, he spits it all out about New Year’s Eve and Santa. Thomas actually sits and listens to this kid who can’t and won’t keep a secret because he was told by his actual mother never to lie. What will Thomas do with this information now that he realizes his son is talking about Brooke and Deacon? Will he tell his father? Stay tuned to The Bold and the Beautiful weekdays to see how these stories play out.