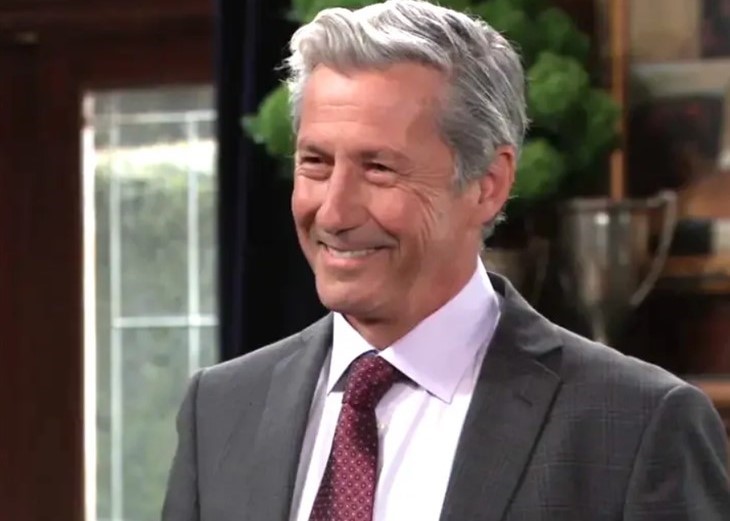 General Hospital spoilers and rumors tease that Victor Cassadine (Charles Shaughnessy) plots to get rid of Laura Collins (Genie Francis) himself, and will fake Lesley Webber’s (Denise Alexander) dire health condition! Unable to get Valentin Cassadine (James Patrick Stuart) to off Laura, Victor takes matters into his own hands in upcoming GH episodes!

According to General Hospital spoilers, Valentin will be tasked by Victor with taking out Laura permanently, because Laura knows that Victor is behind the death of Luke Spencer (Anthony Geary) and she won’t let it go! Laura is also trying to get Victor deported on the grounds of moral turpitude, because of his long criminal record even though he got off many charges. Victor had made a deal with the WSB to provide information on long-standing cases they were trying to solve, in exchange for immunity from prosecution.

Valentin, however, will intentionally fail to take out Laura and Victor finds out Valentin has a moral compass which he did not expect. But Victor still needs to solve the problem of Laura, and he devises a plot to lure her to her doom by getting her out of Port Charles!

GH Spoilers – Lesley Webber Is At An Advanced Age, So Illness Would Not Be Surprising

Lesley is now at an advanced age, so a serious illness would not be surprising considering her age; she last was seen in Port Charles in 2021. Lesley had come to support Laura when Lulu Spencer (Emme Rylan) was seriously injured in the explosion of The Floating Rib and was sent to a long term care facility.

Lesley had also had a dustup with Cyrus Renault, (Jeff Kober) with whose father she had an affair that produced Laura. Laura has had a close and trusting relationship for the most part with her assistant, Deputy Mayor Eileen Ashby (Heather Mazur) who is also Victor’s plant. Victor works with Eileen to arrange for Laura to get news that her mother Lesley is suffering from a dire health condition and needs Laura to care for her.

Laura frets over leaving her Port Charles family with Victor still in town, but yet she’s worried about her mother and her heart is torn. She hasn’t seen her mother’s live-in, Marcello (uncredited actor) since 2017 when she and Kevin Collins (Jon Lindstrom) got married and apparently he is very worried. Marcello needs Laura to come to Italy and he will arrange for a pilot friend of his to come and get her personally – Lesley has had a stroke.

Of course, little does she know that the wire that Eileen received at the mayor’s office didn’t even happen. Eileen knew of Marcello from talking to Laura about her wedding to Kevin and it will be one of Victor’s henchmen who will be flying Laura to “Italy”!

If Laura didn’t trust Eileen so much she probably wouldn’t fall for this – and Victor needs to change his MO, or ‘modus operandi” meaning well established method! How many people has Victor been behind the kidnapping of people where a plane is said to crash that he was behind in the last few years?

Some were in concert with Peter August (Wes Ramsey) but he was still behind them; Drew Cain, (Cameron Mathison) Holly Scorpio, (Emma Samms) Liesl Obrecht (Kathleen Gati)? The plane that Laura is in will be said to have crashed as well, only the difference might be that she might face death for real instead of captivity!