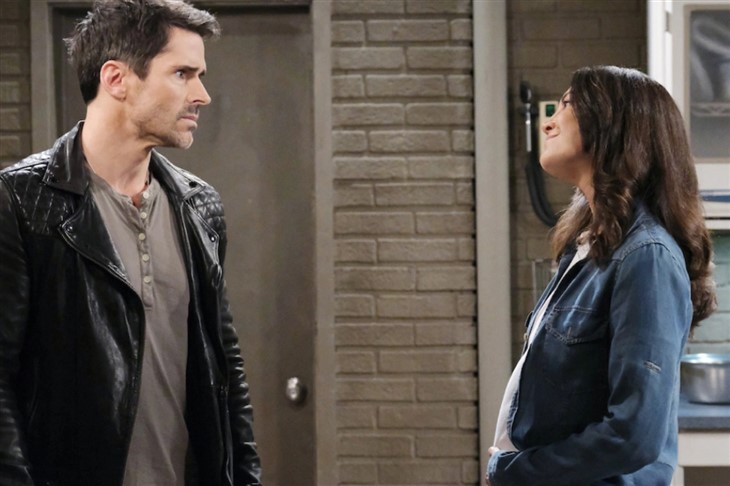 Days of Our Lives (DOOL) spoilers for Thursday, July 6, 2022, reveal Jan Spears feeling the walls closing in on her lies.

Jan Spears (Heather Lindell) finally thought she had everything she always wanted and that is Shawn Brady (Brandon Beemer) by her side with a baby. Why would Shawn believe he got pregnant anywhere but when they were together during a little morphing and Satanic possession? Well, he doesn’t, at least not yet.

But after she’s forced to visit Evan Frears (Brock Kelly) in jail and present him with his son, she knows she has to think fast before Shawn learns the whole truth. So, on Thursday, she lures Shawn to the docks to tell him something, but things are about to go very wrong for Jan as Belle Black Brady (Martha Madison) is still in the picture whether she wants her to be or not. And that can make things for Belle go very wrong, too.

Chad DiMera (Billy Flynn) may be mourning Abigail DiMera (Marci Miller), but that doesn’t mean there’s no news coming from EJ DiMera (Daniel Feuerriegel) that Chad might not want to hear. Does EJ tell Chad about his new romance with Belle? Does Chad even care as he is grieving over his wife?

Perhaps EJ has news for Chad about the Abby murder case, which would make sense, but this is Salem and few things ever make sense. Whatever news EJ feels he needs to share right then and there will absolutely stun Chad.

Days Of Our Lives Spoilers – Nancy Wesley Has Words For LeoStark

Craig Wesley (Kevin Spirtas) may be gone, but Nancy Wesley (Patrika Darbo) has found a new man and is sticking around Salem and she doesn’t care that this new man is an ex-con. He has changed his ways, right? Well, he is Clyde Weston (James Read) and Clyde doesn’t typically change. This is also the first time he has been a free man without having to escape in seven years.

However, when Nancy has an argument with Leo Stark (Greg Rikaart) and Nancy drops a bomb about Clyde, bells go off in Leo’s head because he knows something is up with Clyde and it doesn’t look good for Nancy at all. Stay tuned to Days of Our Lives weekdays to see who those suspects end up turning out to be.