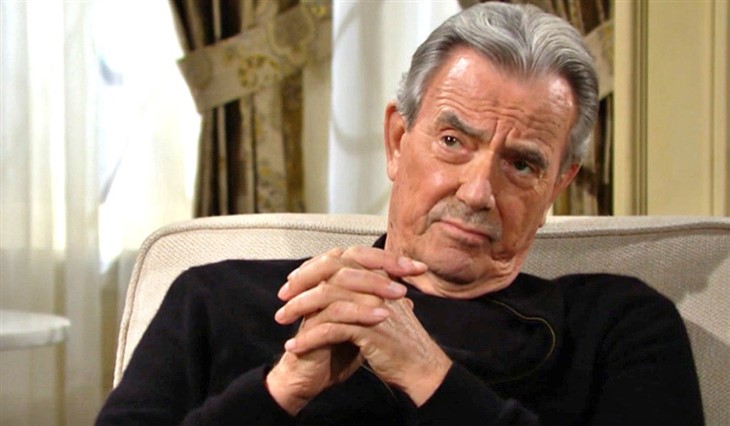 The Young and the Restless (Y&R) spoilers document that Victor Newman (Eric Braeden) is becoming agitated. This time his emotions are tied to both sons questioning his methods to neutralize the Ashland Locke (Robert Newman) threat.

Of course, terming how Victor handled the late Ashland’s body as neutralizing is purposefully cheeky. The head of the Newman family and Newman Enterprises, which are interchangeable titles, wanted a threat permanently handled.

Nick Newman (Joshua Morrow) feels that something is off with the timing of his father’s arrival at Victoria Newman’s (Amelia Heinle) home just after Ashland’s body disappeared. As for Adam Newman (Mark Grossman), he sees through what has happened as well.

The Young And The Restless Spoilers – Ashland Locke Intended Harm

Victor is right in having recognized Ashland as a threat to the Newman family. As Adam learned during his pitch to Ashland at the Genoa City Athletic Club, Victoria’s enraged annulled husband was seeking personal revenge rather than a business attack.

Adam went to his father, brother, and oldest sister to alert them to Ashland’s plans. It was unusual that Ashland rejected Adam’s offer because he sought out Grossman’s character at Crimson Lights to seemingly propose an alliance.

However, Ashland’s implied suggestion came before he was jailed for violating the restraining order relating to Harrison Locke (Kellen Enriquez). That set him off and in a new direction that proved fatal.

Nick’s recent return to Newman Enterprises seemed suspect from the start. While Victoria is the Chief Executive Officer, Victor still has the final say.

That reality telegraphs the repeat of a pattern where Nick and Victor will clash, and Morrow’s character will bolt. It is an interesting plot point to have Nick positioned to become disillusioned with his father on an issue that is already in motion rather than something that will happen.

Victor has long lived by the ends justifies the means code. Nick has been no saint and experienced a period where he went rogue and went after Victor when he was initially diagnosed with a rare blood disease. But Nick’s family-related intentions have generally been the opposite of Victor’s manipulations.

There is a start contrast between Abby Newman Abbott Chancellor’s (Melissa Ordway) experience and Adam’s. However, Abby has never committed the many acts that Adam has. He sees most of them as reactions to what the Newman core started.

Adam attempted to stifle his feelings of victimhood. He sees himself as the eternal outcast who has never been given a fair chance to be a full Newman family member.

There is truth in Adam’s belief because Nikki Newman (Melody Thomas Scott), Victoria, and Nick have never given Adam an open opportunity. They saw him as a threat to their family, meaning the foursome that includes Victor.

How the Moustache responds to Adam’s latest provocation, involving the handling of the Ashland problem, will soon be seen on Y&R.