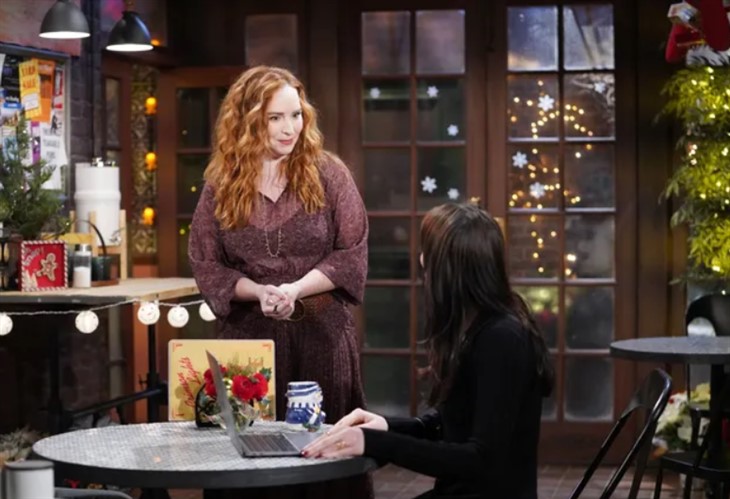 The Young and the Restless (Y&R) spoilers for Thursday, January 20, 2022, reveal Tessa going to great lengths to give Mariah the perfect night with a big surprise at the end.

The Young And The Restless Spoilers – Will Mariah Copeland Say Yes?

Perhaps it was that conversation with Noah Newman (Rory Gibson) where Tessa Porter (Cait Fairbanks) discussed her baby plans with Mariah (Camryn Grimes) and asked if they planned to marry. Did that get the seed planted in Tessa’s head that maybe she and Mariah should wed before starting a family together?

Either way, Tessa treats Mariah to a lovely and romantic dinner at Society where there are hardly any guests around them. That makes it easier for her to get down on one knee at the end of the evening and present Mariah with a ring. Mariah realizes what is happening and is not sure what to say, but it looks like she may have a bomb to drop on Tessa that hopefully won’t break her heart.

The audience can’t seem to figure out Noah Newman’s life and apparently, neither can Noah Newman. He has no real job, no real friends, and no real romance to speak of. He still looks like he is hooked on Tessa but that will never go anywhere. His dad offered him a job and Noah had to think about it. Now, it’s time for Noah to tell Nick (Joshua Morrow) his thoughts, and the older Newman better brace himself now.

The Young And The Restless Spoilers – Abby Newman Feels Desperate

Abby Newman (Melissa Ordway) never realized when she set out to make a baby with no husband involved, but instead all her friends, that things wouldn’t turn out quite as planned. Why would Chance (Connor Floyd) bond with a baby he barely knew about when he was out saving the world? Why would Devon Hamilton (Bryton James) become attached to a baby she kept asking him for help with whenever the baby so much as sneezed?

It doesn’t matter now because Abby needs some legal advice so she turns to Christine Williams (Lauralee Bell) for help. If Devon has a lawyer, so should she. Is Christine a match for Amanda Sinclair (Mishael Morgan)? Stay tuned to The Young and the Restless weekdays to see how these stories play out.