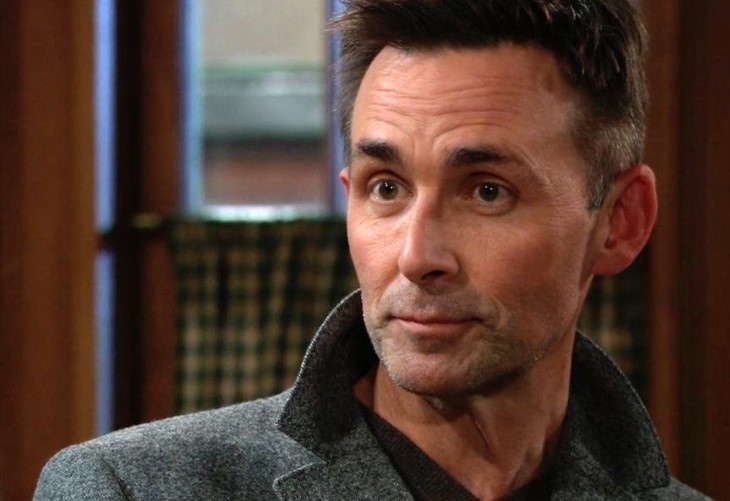 General Hospital spoilers and updates reveal Valentin Cassadine (James Patrick Stuart) was supposed to be a short-term character. Valentin was supposed to have only been on ten days. However, that scripted Cassadine tattoo has been causing trouble ever since. Should Valentin have it removed?

General Hospital’s Valentin was scripted to have the Cassadine Tattoo when he first came on screen. However, since Stuart doesn’t have the tattoo, it has to be redone whenever Valentin shows his arms. Stuart says there have been times that he has been frantically paged because his tattoo would have to be first before filming a scene. Of course, this can get annoying and make Stuart and the powers in charge regret bringing it into the storyline. Perhaps the writers need to make Valentin neurotic enough to wear long sleeves constantly to cover the tattoo. Stuart has even joked with Frank Valentini, executive producer of the show, about writing a tattoo removal into the storyline. Will that infamous tattoo ever disappear?

GH Spoilers – The Tattoo Is A Pain

General Hospital’s Stuart admits that it is a pain trying to keep the storyline straight with the tattoo. Stuart describes the tattoo as the bane of his existence and admits that it is a problem for the producers as well. Stuart would be happy if Valentin had never mentioned the tattoo and then he wouldn’t have to rush to make-up to get it redone every time it has to be seen on screen. That tattoo has to be drawn and then let dry before scenes can be done. If that isn’t enough, the ink gets all over Stuart which does not make him happy either. Frankly, the tattoo could just disappear one day.

As much as Stuart would like to ditch the tattoo, he does admit that it comes in handy for the storyline sometimes. However, that does not mean that Stuart is fond of it at all. Valentin has been a Cassadine only to be told he wasn’t a Cassadine and back again. Valentin is not very happy with being Victor Cassadine’s (Charles Shaughnessy) son anyway. Perhaps Valentin may get upset with Daddy Dearest yet and do away with his tattoo anyway. Could Valentin want a new start getting rid of all things Cassadine? Will Victor finally persuade Valentin to become close to him?

Victor helped Nikolas Cassadine (Marcus Coloma) who came back to ruin Valentin’s life. When will Valentin decide he wants to turn over a new leaf and cut all Cassadine ties and get rid of the dreaded tattoo?