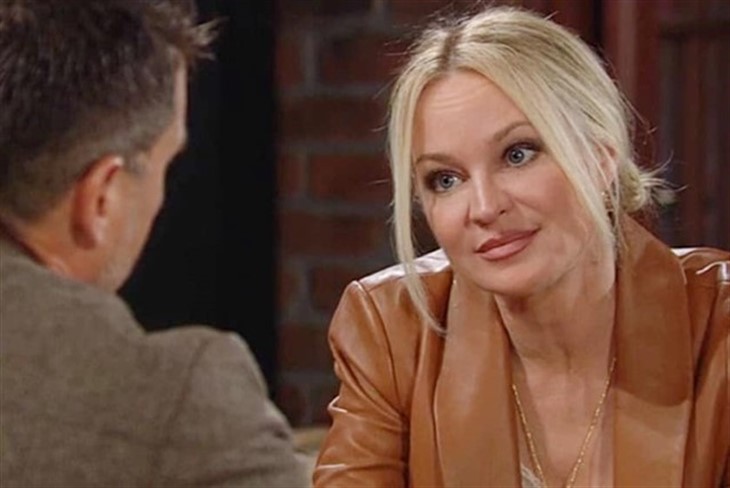 The Young and the Restless (Y&R) spoilers for Tuesday, January 11, 2022, reveal Sharon making Rey jealous again — but this time it’s not with Adam.

The Young And The Restless Spoilers – Surprise Time For Nick Newman

While Sharon (Sharon Case) and Rey Rosales (Jordi Vilasuso) spent New Year’s Eve celebrating their first anniversary as man and wife and reminiscing over the last year, that doesn’t mean everything’s rosy in their marriage. The first year was filled with Rey’s jealousy of Adam Newman (Mark Grossman), with Rey essentially ordering his wife to stay away from him. The second year looks like it’s going to be all about Adam’s brother, Nick Newman (Joshua Morrow).

After their New Year’s Eve celebration, Nick went on to tell Sharon all about his Christmas dream and how he realizes she is the woman who keeps him grounded. And now it’s time for Nick’s birthday and Sharon decides she is going to throw him a surprise party. Rey will not like this but neither he nor Sharon are ready to admit they are much better off as friends rather than man and wife.

Devon Hamilton (Bryton James) has made up his mind. No matter what Abby Newman (Melissa Ordway) says, he wants to have legal access to Dominic and believes when Abby left Dominic with him and didn’t even say where she was going, then she already violated their sperm donor contract. Perhaps Abby might have thought about the consequences of using friends to get the baby she wanted so badly and then involving them in the baby’s life when her husband wasn’t around.

Amanda Sinclair (Mishael Morgan) is on Devon’s side here. After all, she is the one who drew up the initial contract and will be able to find the loopholes. Abby is about to be in for quite a shock.

The Young And The Restless Spoilers – Abby Newman Is Completely Confused

And that’s not the only thing Abby is going to be shocked about. It turns out going ahead with a plan without a partner around and then assuming everything will work out the way she wants it to just because that’s what she wants is not her actual reality.

In the same way that she can barely comfort her own baby, Chance Chancellor (Conner Floyd) doesn’t feel a connection to this baby and doubts he can be a good father to him. Abby wonders why as it doesn’t occur to her that Chance couldn’t just walk into this family she created like he’s out of central casting and be the sitcom dad she wants. Stay tuned to The Young and the Restless weekdays to see how these stories play out.

B&B Spoilers: Hope Lashes Out At Steffy And Taylor

Counting On Fans Can Send Josh Duggar Gifts – Here’s How