B&B Spoilers: Hope Lashes Out At Steffy And Taylor 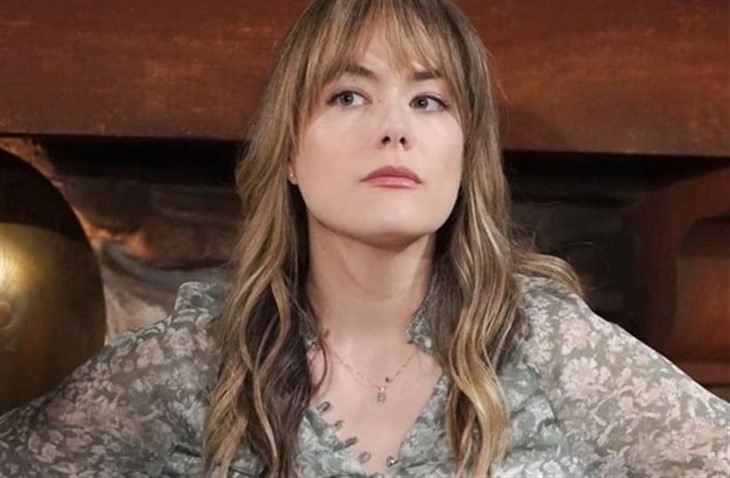 The Bold and the Beautiful (B&B) spoilers for Tuesday, January 11, 2022, reveal a devastated and angered Hope shocking her stepsister and her stepsister’s mother.

Hope Logan Spencer (Annika Noelle) can still barely believe her mother started drinking again and the result of that drinking is her no longer wanting Deacon Sharpe (Sean Kanan) to be a part of their lives. Just when Hope was finally getting to know her father, she got the rug pulled out from under her and she wants to know why. There has to be something that drove Brooke Logan Forrester (Katherine Kelly Lang) to drink again and she thinks she knows what happened (too bad she is wrong.)

It turns out Hope just assumes Steffy Forrester (Jacqueline MacInnes Wood) and Taylor Hayes (Krista Allen) are causing her mother too much stress. So, she heads over to Steffy’s to tell them both off and warn them to stay out of Brooke and Ridge’s marriage. They are not quite sure what she is talking about, but it might dawn on Taylor that her new buddy, Sheila Carter (Kimberlin Brown), is up to something. She’s made it quite clear how she feels about Brooke.

B&B Spoilers – Carter Waton Is Stuck In The Middle Again

Poor Carter Walton (Lawrence Saint-Victor) has had a terrible run of luck with women over the last year. From his twice-broken engagement to Zoe Buckingham (Kiara Barnes) and his on-again/off-again affair with Quinn Fuller (Rena Sofer) to his friendship and near-romance with Katie Logan (Heather Tom), Carter has been through the wringer and now it looks like he’s about to have women trouble once again. He just seems to be walking into these things.

Paris Buckingham (Diamond White) kissed him on New Year’s Eve and he kissed her back. And Zende Forrester (Delon De Metz) is in love with her and wants to marry her. Uh-oh. What could go wrong now? How about Zende wondering if maybe Paris likes someone else since she is trying her best to avoid him? And when he asks Carter if he knows anything about that, Carter is not quite sure what to say. Perhaps he needs to stay away from all Forresters and Forrester-adjacent people. Stay tuned to The Bold and the Beautiful weekdays to see how this story plays out.

Days Of Our Lives Spoilers: Allie And Chanel Take Things To The Next Level