The Young And The Restless Spoilers: Nate Cheats, Imani Gets Her Way 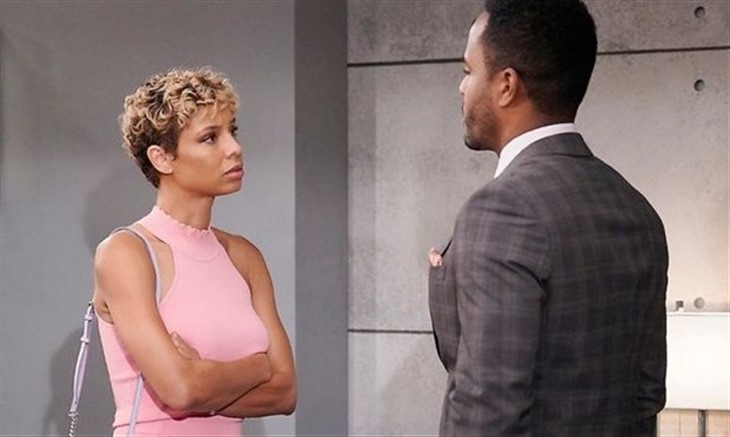 The Young and the Restless spoilers show that Imani Benedict (Denise Boutte) is in full control of Nate Hasting (Sean Dominic) and continues to be behind him wherever he goes. Of course, this has rubbed Elena Dawson (Brytni Sarpy) the wrong way and it’s forcing a lot of pressure on the two.

Imani has constantly flirted with Nate and now, she is even starting to mock Elena to her face, teasing her about her own boyfriend in front of her and it’s a bit brutal to watch. Something is definitely going to go down between the two and while Elena is trying to be the “bigger person” now, I think it’s only a matter of time before they throw down!

The Young And The Restless Spoilers – Nate Hastings Cheats!

I don’t think it will take much for Imani to get her way as Nate seems to already be under her spell. She gives him constant reassurance, tells him his ideas are the best thing in the world, and plays him like a fiddle every time they are together.

Even during the meeting today she would lean over and tell him how great he is and how his ideas are the best ones around. It’s inflating his ego and I think it will be very simple for him to lose focus and cheat with her. She’s been throwing herself at him for months and it’s bound to happen.

It has been a good minute since we have a catfight in Genoa City. I think this would be the perfect time for one to happen as there are two women fighting over Nate and now Imani is just rubbing it in Elena’s face. I don’t think Elena should stand for this and take the fight to her.

Let Imani know she is not messing around and if she wants Nate she will have to go through her. I don’t know if Imani would step up or shy away from this challenge, but something needs to happen because if Elena continues to sit back and do nothing, Imani will steal Nate from her right in front of her eyes!

What do you think? Is Imani going to get Nate to cheat on Elena with her? Should Elena step up and make sure that Imani doesn’t do anything like this or does she really trust Nate that much? Share your thoughts and remember to keep watching the CBS soap to see what happens next.

The Bold And The Beautiful Spoilers: Steffy Pushes The Parent Trap Envelope